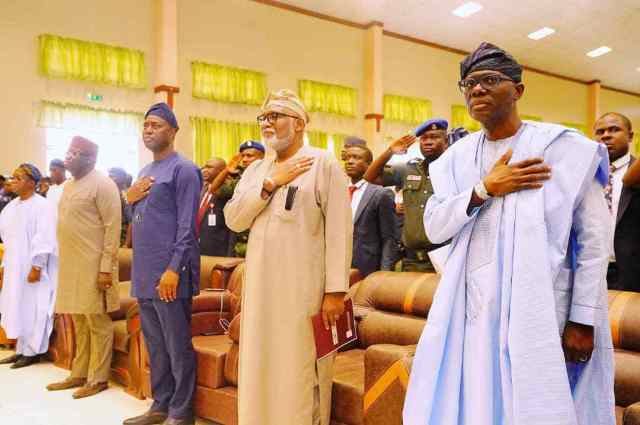 Lagos State Governor, Mr. Babajide Sanwo-Olu on Tuesday, June 25th, 2019 joined his counterparts in the South West to renew the call for the creation of State police as one of the major steps to stem the growing tide of insecurity in the region.

Governor Sanwo-Olu, alongside Governors of Ogun, Oyo, Osun, Ondo and Ekiti States converged on Ibadan for a Stakeholders’ Security summit on Tuesday with a resolve to end what they described as unholy invasion of the region by armed bandits suspected to be from other tribes in the country, thereby causing security breach and creating unnecessary tension in the relatively peaceful zone.

The Chief Executives of the six States in the region unanimously agreed to the creation of State police so as to confront the challenge head on, listing the benefits inherent in having it.
In his speech, Governor Sanwo-Olu suggested that advocacy be introduced while State Police be considered to compliment the effort of the Federal Police in all States of the federation.

“State Police is the way to go. This would give the Chief Security officers in each of the States the opportunity to direct their affairs and make them accountable instead of waiting for Federal directives before major actions could be taken on incidents of banditry, cultism and other heinous crimes. Controlling one’s police at the State level would help us achieve unhindered and accelerated response to any criminal activities recorded within our communities “, he said.

According to him, “The importance of security in human existence cannot be underestimated which means security is paramount to the existence of all human beings and no meaningful development could be recorded in the absence of security.”

Sanwo-Olu urged all States Governors in the zone and stakeholders alike to put all machinery in motion to find a permanent solution to the security lapses, adding that we should all speak with one voice and remove politics so as to put a permanent stop to the incessant incursions on our land.

The Governor maintained that no developmental strides could be achieved in the absence of security, just as he commended the efforts of the DAWN Commission for the laudable programme.

According to him; “The issue discussed here today coincides with the deliberations of the governors during a meeting with President Muhammadu Buhari and at the Governors Forum held last week in Abuja”.

He however suggested deep and consistent advocacy amongst our people even as he called on people from the region to live together and embrace unity as a way to sustain security and curb invasion.

Also earlier, the Chairman, Southwest Governors Forum, Arakunrin Rotimi Akeredolu, while declaring open the summit, reiterated that protection of lives of residents and people of South west is paramount to all the governors, hence their support for the creation of DAWN Commission.

He said the meeting was the Commission’s effort at creating engagement and discourse for finding a lasting solution to the security challenges in the south west.

BURATAI TO JOURNALISTS: PUT NIGERIA’S INTEREST FIRST IN YOUR REPORTAGE