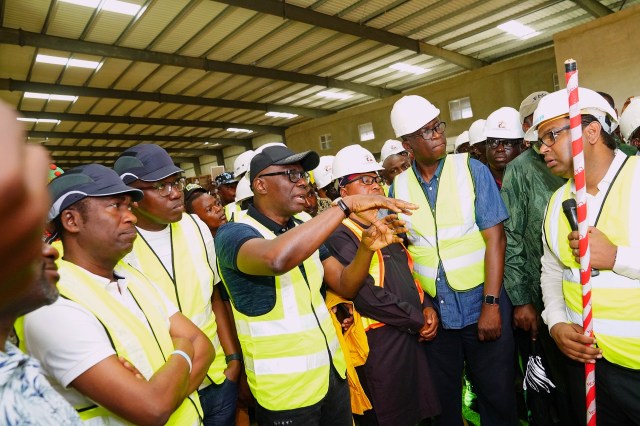 Governor Babajide Sanwo-Olu of Lagos State on Thursday, july 4th, 2019 defied the downpour to inspect the Rice Mill and Industrial Park project being developed by the state government at Imota in Ikorodu Division of the state.

The inspection tour of the project site, Gov. Sanwo-Olu said, is in fulfillment of his promise to continue all unfinished projects initiated by previous administrations. The Governor was joined on the inspection by his Deputy, Dr. Obafemi Hamzat, and Head of Service, Mr. Hakeem Muri-Okunola.

Sanwo-Olu said the visit was to assess the progress of the project and also to get the contractor’s confidence on the completion date.

Describing the project as “capital intensive and strategic”, the Governor said the rice mill would be the biggest in the country when completed. The project, he said, is being built with a capacity to produce 32 metric tons of rice per hour and 2.8 million bags of 50kg bags of rice per annum.

He said: “The tour of the project site is another pointer to our pledge of continuity in governance. We are taking the pain to come down to Imota to assess the magnitude of the rice mill and industrial park project initiated by my predecessors. This is a 32-metric tons per hour rice mill, which is the biggest in the country. In terms of national importance, the rice mill is expected to meet 15 to 20 per cent of national demand for rice.”

After touring the project site, the Governor expressed satisfaction on the level of work done by the contractor, but said a lot of work still needed to be done. He assured that the contractor would be kept on site to ensure timely completion.

The Governor said: “By the end of this year, we should see the first phase of the project completed. It is not for us to just have the biggest rice mill, but to also begin a conversation with rice producers in rural areas to have massive cultivation and production through the mill.”

“The mill is being built with a capacity to store up to 36 months of hundreds of thousands of rice bags. We have studied the entire value chain and we are speaking to other stakeholders to ensure this project, when completed, can galvanise people towards the objective of President Muhammadu Buhari, which is developing local capacity towards boosting agriculture and feeding the nation from local produce.”

When completed, the mill and industrial park are projected to generate over 1,500 direct jobs, while 254,000 indirect jobs were also expected to be created in the value chain.

The light industrial park on the project site, Sanwo-Olu said, is being built by the Ministry of Commerce and Industry to boost small and medium scale businesses around the axis. The Governor said the park would have amenities that would make businesses to thrive and bring returns on investment to business owners.
Managing Director of CIBA Construction Company Limited – the contractor handling the project – Mr Josiah Samuel assured the Governor of the firm’s commitment to the agreed completion date, disclosing that the firm was re-mobilised back on 12 months ago.

Samuel said: “As at today, the Industrial Park is in over 60 per cent completion stage. But, the rice mill is being put together. There are different components of the rice mill. We are done with entire piling work; we have had to sink 700 piles on the site. The substructure of the mill is completed.”

“There are 16 silos to be constructed on the rice mill site, but the substructures of the six of the silos have been completed. We expect that before the end of 2019, this facility should be up and running.”

The contractor said weather was the main challenge it was facing in the construction work, promising that the firm would keep to completion date.

The twin project is being jointly built by the Ministries of Agriculture, and Commerce and Industry. The rice mill sits on 8.5 hectres out of the 26 Hectres developed for the entire project. The construction works are supervised by the Ministry of Works.

FirstBank to Empower 500 Widows through its SPARK Initiative