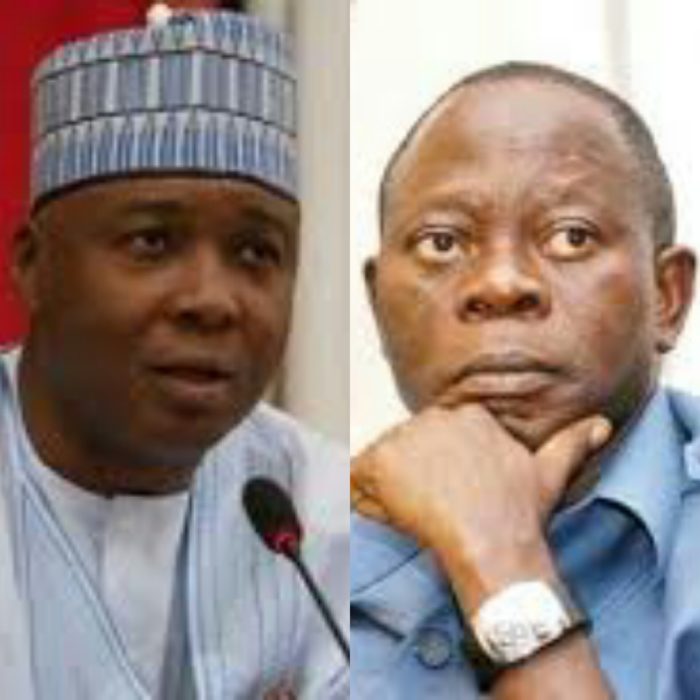 According to him, it was a matter of honour for Saraki to leave “the crown” in the family it belonged to.

Punch quoted Oshiomhole as saying that, “But whatever is the reason, we can decamp from party, but we can’t decamp from Nigeria. The only thing is that there are other consequential issues that every man or woman of honour who had taken such decisions would be expected to follow through.

“I mean, you should not collect a crown that belongs to a family and wear it on behalf of the family if for your personal reasons which he has enumerated that he has gone to another family. It is just a matter of honour to leave the crown in the house that the crown belongs to.

“As it stands even now, APC is still the largest party in the Senate. We have 53 senators, that is much more than PDP or APGA has,” he said.

Oshiomhole said nobody in the party would be surprised by the decisions of those who defected because the signs were clear before now.

He, however, admitted that it was a tempting moment for the party.

He added, “Nobody in the APC will be surprised about the development. In fact, they have stayed a little bit longer than we thought. Last week, the Kwara State Governor said he was leaving, but he didn’t say when. So, we are not surprised at all.

“But these are what I might call temping moments because I had faced similar situations in my state, when people were leaving. But the beauty of democracy is that whether big or small, it is one man, one vote, on election day. There is no difference between a senator, a president, a journalist and any other person.

“In a sense, we have to accept that once a couple for one reason or the other find out that they are not compatible, the only honourable thing is to go.”

Oshiomhole said he was happy that Saraki admitted that he (Oshiomhole) and Vice President Yemi Osinbajo, as well as some state governors, tried their best to resolve the matter that led to his exit.

“But he argued that those efforts came too late. But I couldn’t have started acting before I was born,” the party chairman said.

While admitting that there are lessons to be learn from the development, Oshiomhole said going forward, he would expect the system to get stronger to the extent that it is able to learn the correct lessons and take the correct steps.