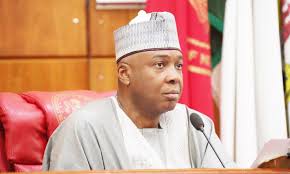 A former President of the Senate and ex-Kwara State governor, Bukola Saraki, has described the recommendation of the White paper panel on the sale of government assets that he and his successor, Alhaji Abdulfatai Ahmed, be prosecuted for the alleged mismanagement of the state’s properties as diversionary.

A statement by the Chief Press Secretary to the Governor, Rafiu Ajakaye, on Thursday said the panel recommended that the two former governors and other ex-government officials named in alleged economic sabotage against the state through the sale of public assets to their cronies at giveaway prices should be prosecuted.

The statement read in part, “The Chairman of the White Paper Panel on the unlawful sales of government’s properties from May 29, 1999 to May 29, 2019, Mr Hussein Buhari, said during the submission of the report that findings in the report were mind boggling and said nothing short of diligent prosecution, possible jail terms and recovery of many of the properties can avenge the official connivances that led to the pilferage of the assets.

“He said the former governors and many of their aides have questions to answer on how public properties and shares were sold under questionable circumstances, including on the eve of their departures from public offices.

“Buhari said none of these officials honoured the invitations for them to clear the air on the deals, and said the administration should prosecute them as a matter of justice, a request Governor AbdulRahman AbdulRazaq, said has been noted for action.”

The chairman of the panel as quoted as saying, “The committee swung into action immediately it was inaugurated and went through the report of the judicial commission of Inquiry on the sale of Kwara State Government assets between May 1999 and May 2019. There is so much rot perpetrated by the past governments, especially in the 16 years before 2019.

“For instance, the rot about Shonga Farms, Satellite Motel, and our properties in Kaduna, Abuja and Lagos is simply inconceivable. They were all sold to themselves at giveaway prices. We saw criminal conspiracies. In fact, Kwara State is now heavily indebted to some people, because the past governments mismanaged our properties.

“I just wish Governor AbdulRahman AbdulRazaq will have the courage and political will to implement the report so that everybody found wanting will be brought to justice. The Electoral Act is very clear that anybody, who is found guilty of mismanagement of resources, should be banned for 10 years from holding political office. We wish the government will accept our recommendations and set up an implementation committee.”

However, the Abubakar Bukola Saraki Media Office, in a statement titled: ‘Abdulrahman’s Govt’s False and Diversionary Claims’ and signed by the Press Officer, Local Matters, Abdulqadir Abdulganiy, described the statement by the government as incoherent and fallacious, as well as containing salacious claims, adding that it showed how low governance had become in Kwara State.

The statement read in part, “First, for the information of discerning members of the public, neither Dr Abubakar Bukola Saraki, who left the office of governor of Kwara State 10 years ago, nor Alhaji Abdulfatai Ahmed, the immediate past governor, got an invite to appear before any investigative and fact-finding panel set up by the Abdulrazaq administration. Thus, it is clear that the so-called investigation being conducted is not about finding facts. It is about throwing mud and staining the predecessors of Abdulrahman Abdulrazaq in office.

“Secondly, while reacting to the claims contained in the poorly written and disjointed press statement, it should be noted that both Dr Saraki and Alhaji Ahmed will never be shy of giving account of how they managed the assets of Kwara State. In fact, both men took decisions concerning those assets in a manner that would enhance their value and stimulate economic activities in the state, which was hitherto referred to as a civil service state.”

On the issue of the Kwara Mall, the ABSMO said it stood today as the epicentre of economic activities in Ilorin and its importance was further underscored by the decision of the government to give the owners of businesses inside the mall a grant totalling N1bn to cushion the harsh effects of the #EndSARS protest on their property.

The statement added, “It is obvious that the mall today provides direct and indirect employment to hundreds of Kwarans and Dr Saraki is proud that his administration initiated the idea where Ilorin became the first town outside Lagos to host a Shoprite in its mall.

“The press statement also mentioned the Shonga Farms as one of the projects on which the government seeks to make the Saraki administration look bad. This Shonga Farms, more than anything, demonstrates the cluelessness of the current governor of Kwara State and his advisers. That is why on some occasions, key officials of the administration will hold the Shonga Farms as a glory of Kwara State, and on some other occasions, like the case of the press statement under reference, it will seek to paint it in bad light.”

Ahmed had yet to react to the panel’s recommendations as of the time of filing this report.