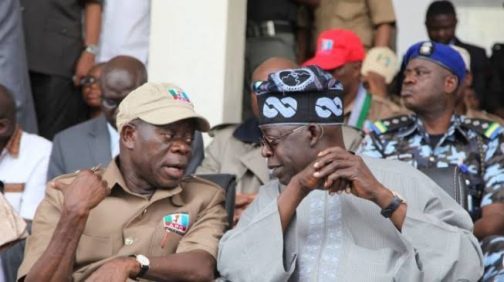 Top members of the All Progressives Congress in Lagos are monitoring and strategizing to protect the interest of the National Leader of the party, Asiwaju Bola Tinubu, amidst the crisis rocking the party.

According to Daily Trust, many of the loyalists and associates of the APC leader declined to comment openly on the lingering crisis in the party, including the legality of Adams Oshiomhole as the National Chairman of the party.

Oshiomhole had dismissed the court ruling as ineffectual, waving a counter court ruling from the Federal High Court in Kano but the acting National Secretary of the party, Giadom, called for an emergency NEC meeting and insisted that the suspension of the national chairman subsisted.

However, when contacted, Tinubu’s camp said they were being tactical but won’t comment since their principal has not made any open comment on the development.

“But certainly many things are going on behind the scenes which we don’t want to comment openly about. “At the appropriate time, we will make our position known on the issue but we are being tactical now that Asiwaju, who is our principal, has not said anything,” Daily Trust quoted one of the APC chieftains who pleaded anonymity.

Another source was quoted to have said, “I can tell you we are not going to allow anyone to rubbish our leader. We remain solidly behind him and we don’t fear any evil machinations from any quarters. But at the appropriate time, you shall hear from us.”

The media aide to Tinubu, Mr. Tunde Rahaman was also reported to have declined to respond to an inquiry on the issue.

WHY WE CLOSED PARTS OF EKO BRIDGE – SANWO-OLU