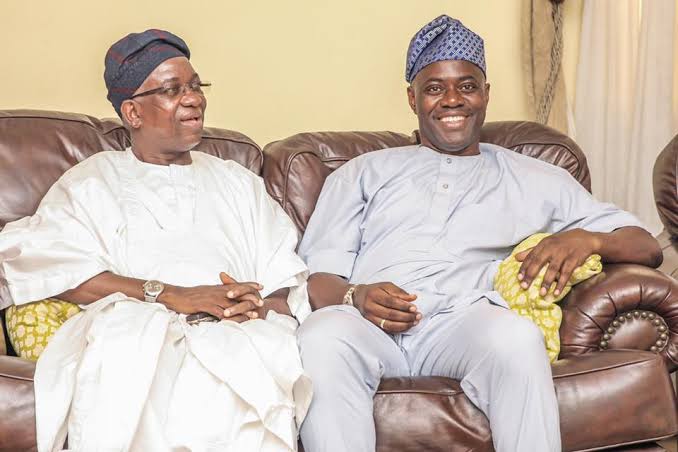 Barring any last-minute changes, plans are underway to impeach the deputy governor of Oyo state, Engr Rauf Olaniyan, on account of trump up allegations after Coronavirus (COVID-19) crisis.

All appears not well between Governor Seyi Makinde and his Deputy, Rauf Olaniyan. Recent developments revealed the frosty relationship between the duo and rather than abating; the cold war worsened.

Operanews exclusively gathered that some people at the corridors of power who are loyal to Governor Makinde are plotting to initiate moves to impeach the deputy governor, who is understood to be desirous of becoming a governor.

Sources who spoke in confidence disclosed that Olaniyan being a potential governorship candidate with supporters across the local government areas in the state and as a ‘fat cat’, he has the ‘war chest’ to successfully pursue his political ambition, the dissatisfied camp is threatened, thus agreed to boot him out of government.

In a related development, one of the sources and a prominent PDP chieftain in the state also revealed that the camp alleged the deputy governor of making surreptitious moves to impeach the governor, Engr Seyi Makinde.

The OperaNews source added that he was also alleged of holding a secret meeting with one of the principal officers in the state House of Assembly, to orchestrate the planning process.

Recalled that Governor Makinde , when tested positive of Coronavirus (COVID-19) directed the former Chief Medical Director of the University College Hospital (UCH), Ibadan, Prof Temitope Alonge, to be the Head of COVID-19 Task Force as he recovers, instead of his Deputy, Olaniyan, another source told OperaNews.

The source linked Governor Makinde’s decision to the rift between him and his deputy, Olaniyan, adding that the deputy governor has been sidelined from serious business of governance.

“Have you heard Olaniyan’s voice since we had been battling with the deadly Coronavirus? When last did you see the Governor and his Deputy together? We have been seeing Governor Sanwo-Olu and his Deputy combating the pandemic, while other governors like Elrufai when tested positive handed over to their Deputies.

“My brother, Engr Olaniyan may be impeached after coronavirus crisis; all arrangements have been concluded. Major stakeholders are really following the trend, but its really a bad omen”, insiders said.

The deputy governor of Oyo state, Engr Olaniyan, an indigene of Igboho in Oorelope Local Government Area in Oke Ogun geopolitical zone of the state, had earlier served as General Manager of Oyo State Road Maintenance Agency (OYSROMA) during the tenure of Senator Rasidi Adewolu Ladoja as Governor. He was a gubernatorial candidates under the platform of the African Democratic Congress (ADC) in the 2019 elections in the state.

Operanews exclusively gathered that some people at the corridors of power who are loyal to Governor Makinde are plotting to initiate moves to impeach the deputy governor, who is understood to be desirous of becoming a governor.

COVID-19: See how deputy commissioner of police ‘died at his apartment