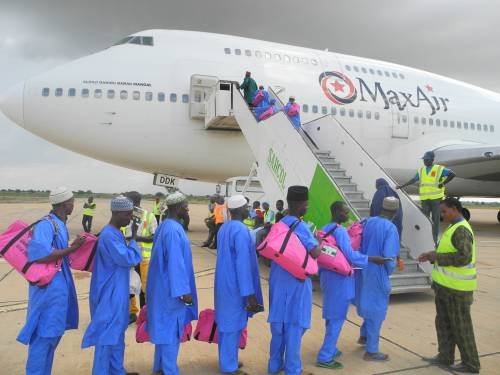 The upper legislative chamber, made the vow at the beginning of a two-day public hearing by the its Adhoc Committee on Accommodation, Logistics, Feeding Offshore and Onshore of Nigeria Pilgrims held in Abuja on Wednesday.

Chairman of the Committee, Sen. Adamu  Aliero lamented that “there are tales of woes and sorrows by Nigerian pilgrims as it relates their accommodations, feedings, hajj fare and movements while in Saudi Arabia.

“There were allegations of fraudulent extortion and imposition of charges by the National Hajj Commission through shoddy deals in accommodations, transport fare and feeding.

“It is alleged that the Nigerian hajj fare is highest in Africa and one of the highest in the world.

“While Nigerian pilgrims were normally accommodated in dilapidated, overcrowded and very far away hostels from the Haram, their counterparts from other countries enjoy better and more conducive accommodations throughout the hajj exercise”, he said.

Aliero said it was unfortunate that some government agencies and individuals responsible for regulating, controlling and monitoring of religious activities engaged in corrupt practices and self-enrichment at the expense helpless pilgrims.

He, however, maintained that “as a responsible arm of government, this Senate cannot fold its arms and look the other way while our fellow citizens are being shortchanged by greedy, corrupt and inconsiderate fellow country men.”

He assured that the committee would unravel the allegations and come up with far reaching recommendations that would guarantee transparent hajj operations free from all sorts of abuse.

While declaring open the session, the President of the Senate Dr Bukola Saraki said the senate viewed the allegations as serious, hence the need to set up the ad hoc committee to look into them so as to make hajj exercise much easier for Nigerian pilgrims.

Saraki, represented by Sen. Ahmed Sani, described hajj as one the most important pillars of Islam which every Muslim is aspiring to perform at least once in lifetime.

“As Nigerians, we like to put God first in all that we do. We are very strong in faith and we take religion very seriously indeed.

“Not only because we believe that God orders our steps and the course of the nation – but because we also know that this way, we can be better people, and a better country under God.

“It is perfectly understandable, therefore, that many of our people strive to go on pilgrimage to the holy land.

“No fewer than 81,000 Nigerians performed the Hajj (pilgrimage) in 2017, and I understand that we have about 95,000 slots for this year. Little wonder our country contributes the fifth highest number of pilgrims to Mecca each year”.

Saraki therefore stressed the need to address all matters affecting pilgrims including the apparent discrepancy between fares charged by NAHCON and independent tour operators.

It would be recalled that the Senate had on July 20, 2017 debated on the astronomical hajj fare announced by NAHCON last year under a matter of urgent public importance brought before it by Sen. Ibrahim Danbaba (APC-Sokoto).

BOYFRIEND, 26, BEATEN BY SUGAR MUMMY, 54 FOR CHEATEN ON HER