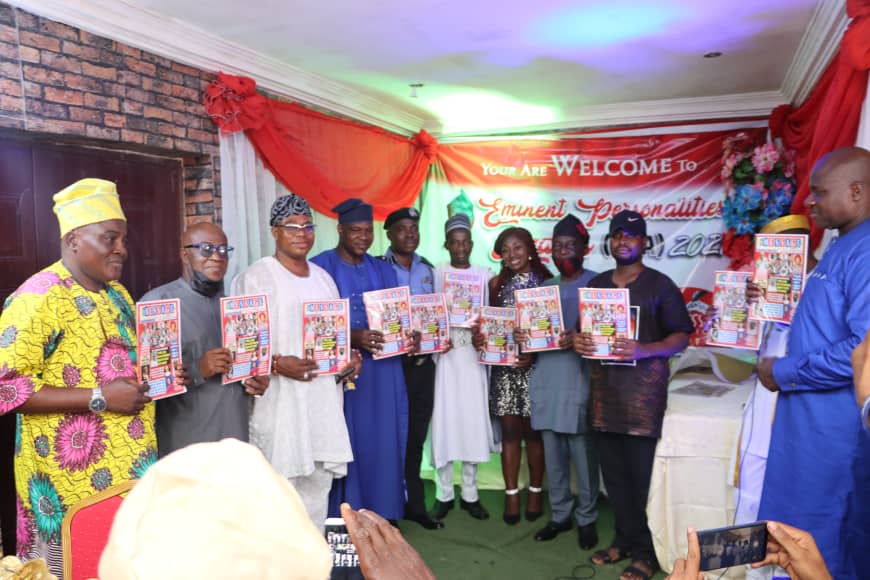 On Sunday, 14th of November, 2021, Definite Destiny Hotel, Ikeja, Lagos was agog for the celebration of four years of The Message International and third edition of Eminent Personalities Awards (EPA) with the attendance of who is who from all walks of life.

Among the prominent Nigerians that graced the high octane and historic event were Comrade Senator Patrick Abba Moro of Benue south Senatorial District, ACP Bode Ojajuni(in his capacity as an awardee and a representative of Lagos Commissioner of Police, CP Hakeem Odumosu), Dr Daniel Kolawole, MFM General Overseer ably represented by Pastor Gabriel Abayomi, Nollywood Actress Empress Ene and the representative of U K based actress cum producer, Adesuwa Ogechi- Udo, Chief Bosun Lowo of Boslow Promotions fame and other dignitaries from far and near.
The programme started around 4pm while one of the Masters of Ceremonies, Prince MacDonald invited pastor Gabriel to say the opening prayer followed by the National Anthem.

Mc Donald acknowledged the presence of the prominent people at the August occasion. He later read out the biography/profile of the CEO/ publisher of The Message International Magazine, Mr Tade Asifat to all ears before giving his welcome speech.

In his speech, he narrated his journey into journalism world and also explained that 2021 edition of Eminent Personalities Awards is supposed to be the fourth and not third as it’s today, but due to COVID-19 pandemic that ravaged the whole world and destroyed almost all social and economic activities globally.

According to Asifat, those who deserve the award are people of honour and those that have excelled in their choice fields and have contributed directly or indirectly to the development of Nigeria in no small measures; the title, Eminent Personalities.

He further explained that journalism is not an easy job because it has to do with a lot of risks. He therefore advised the younger ones to be focused and resilient, and not to put money first so that they can go places in the profession. He also enjoined journalists across board to shun biased reportage of issues or events or any write-up that may appear inimical to the unity and peace of Nigeria.

The brilliant publisher also used the occasion to announce his wife, Hajia Zainab Asifat’s birthday which happened to be that same day. This attracted the attention of the guests who later celebrated the beautiful Hajia with happy birthday chorus.

Moreover, ACP Bode Ojajuni gave a lecture on security. He talked about the importance of security to citizens and the society. He said citizens should not always depend on the security agents to protect them that they can also secure themselves in their little way they can.

Senator Patrick Abba Moro buttressed that security is everyone’s business, that we must take deliberate steps to cooperate and support our security agents in stamping out insecurity in our various communities and the country at large in order to make our country better and safer to live in.

Furthermore, the MCs(Prince Mc Donald and MC kirikiri) called out the awardees led by Senator Abba Moro to unveil the all colour, all gloss, no gossips and no scandal magazine.

The entertainment content of the talk of the Town event was second to none as the MCs really cracked the guests up with their hilarious jokes while different artistes from various parts of the country, including, HY2, Real Love, Ceeskay, Kay Baba and others to complement the main artiste of the day, Omolaja Lowo, popularly known as Arole who thrilled the guests till the event lasted.