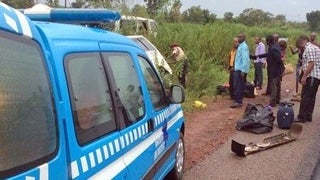 The Ogun Command of the Federal Road Safety Corps (FRSC) on Friday said six persons died while 24 others sustained injuries in an accident involving two commercial buses at Isara area of Ogere on the Lagos-Ibadan expressway.

Clement Oladele, the Ogun Sector Commander of FRSC, told the News Agency of Nigeria (NAN) in Ota, Ogun State, that the accident happened at about 8.30 a.m.

Mr Oladele explained that a commercial Mazda bus with registration number FST-820 XD coming from Lagos left its lane while overtaking dangerously and collided with a Toyota bus marked ABC-932 XJ on the opposite lane.

He said that 30 people comprising 20 males and 10 females were involved in the accident.

The sector commander said that six people died while 24 others sustained various degrees of injury in the accident.

Mr Oladele said the corpses of the victims had been deposited at the mortuary of Olabisi Onabanjo University Teaching Hospital, Sagamu.

“The fatal crash was caused by excessive speed and wrongful overtaking when the Mazda bus travelling from Lagos left its lane while overtaking dangerously and collided with the Toyota bus coming from Abuja and travelling on the opposite direction,” he said.

The FRSC boss said that the obstructions had been cleared to restore the free flow of traffic on the expressway.

Mr Oladele, however, commiserated with the families of the deceased and wished those injured quick recovery.
He added that public should contact FRSC Command in either Ogere or Ogunmakin for details of the crash.

“They may also contact the aforementioned medical facilities for details of the incident,” he said.

He expressed sadness over the crash, saying it was avoidable if there was strict adherence to a speed limit of maximum 50 kilometres per hour and refraining from overtaking around construction zones.

He cautioned motorists against wrongful overtaking that could lead to loss of lives and property. (NAN)