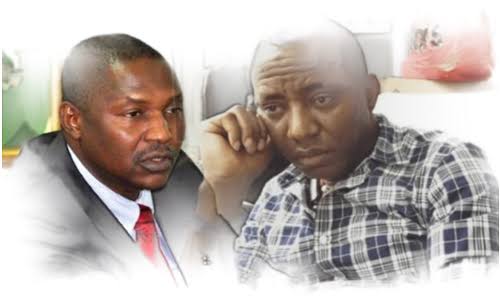 U.S. lawmakers have written a letter to Nigeria’s Attorney General of the Federation, Abubakar Malami, over the continued detention of Omoyele Sowore, a political activist.

The letter which cautioned Mr Malami against the disobedience of rule of law under President Muhammadu Buhari’s administration.

Mr Sowore, publisher of Sahara Reporters, was arrested on August 3 for planning #RevolutionNow, a series of protests to demand an end to corruption and demand better living conditions for all citizens.

The protests were planned to commence on August 5. But on August 3, armed State Security Service (SSS) officers broke into an apartment Mr Sowore was occupying with some of his associates in Lagos. He and his associate, Olawale Bakare, were taken away in the raid that was captured by security cameras.

The SSS refused to release Mr Sowore and Mr Bakare despite two separate court orders for his release.

They were eventually released on December 5 after a court on that day directed the SSS to release both men within 24 hours.

A day later, the SSS stormed the court to rearrest Mr Sowore. He has been held without fresh charges since then.

The U.S. lawmakers in their letter dated December 20 to Mr Malami said they are really concerned that established legal procedures and rule of law are not being followed in Mr Sowore’s case.

“Disturbing videos of the melee in court are circulating, which appear to show armed agent in court and Mr Sowore being placed in choke hold after which he was re-detained by DSS, though no new charges have since been filed to justify this re-detention. We understand that his case has since been placed within your purview”, part of the letter read.

“We are pleased to stand alongside Nigeria as a democratic country. As the largest democracy in Africa. Nigeria has an opportunity and responsibility to serve as model for following the established rule of law under its own constitution. And as with all advanced democracies, this includes the lawful application of prosecutorial powers and actions as well as ultimate compliance with judicial rulings. In the case of Mr Sowore, this does not appear to have happened”.

The lawmakers said Nigeria must learn how to uphold the basic human rights of its citizens including their “freedom of expressions and political affiliation without fear of government reprisal and harassment, particularly for opposing or dissenting voices”.

“Mr Attorney General, we request that you take immediate steps to ensure the safety and security of Mr Sowore while he is held in government custody; work to facilitate speedy and fair resolution to the circumstances of his re-detention; and ensure he receives a legally sound and credible trial.”

The lawmakers maintained that the continued detention of Mr Sowore will only serve to tarnish Nigeria’s international reputation.

In an article titled: “Buhari’s Dictatorial Past and the Rule of Law Today in Nigeria” Mr Campbell said: “the state security service assault on a courtroom and the re-arrest of Sowore has already damaged the country’s international reputation.
-Premium Times

Be careful this Christmas! You can contract 9 diseases, acquire 80m bacteria through kissing