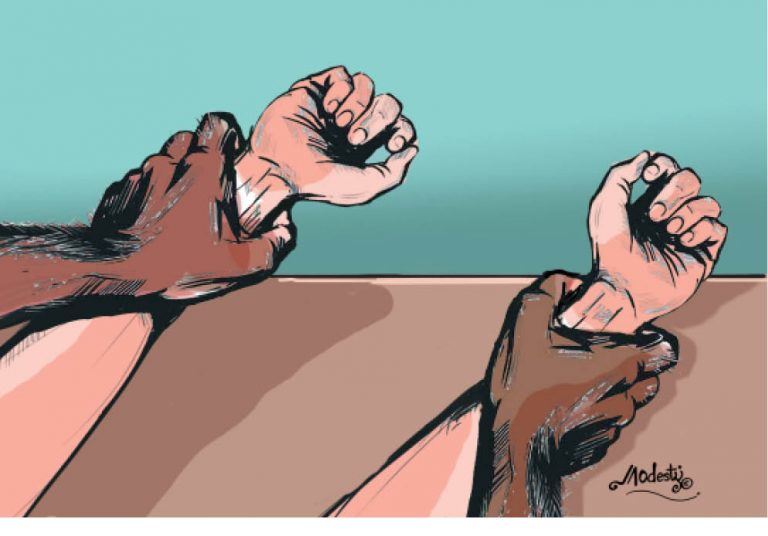 Just an Illustration of rape

A 300- level Agricultural Science Department of the University of Ilorin, Olajide Omowumi Blessing, has been allegedly raped to death.

The deceased, who hails from Oke-Opin in Ekiti local government area of Kwara state, was said to have been raped to death in her Tanke, Ilorin home on Tuesday.

The deceased was said to be staying with her elder sister at Tanke area before her death.

Kwara Police Command spokesperson Ajayi Okasanmi confirmed the incident, adding the Command has launched a manhunt on the perpetrators.

Okasanmi gave details of the incident: “The deceased stayed with her elder sister. The elder sister came back from work at about 06:00pm on Tuesday, saying that she had tried severally to reach her on phone but couldn’t as the phone kept ringing.

“She came back from work to meet the door of her apartment locked and couldn’t gain entry despite repeated knocks on the door. She then called some neighbours who helped to break open the door.

“They all met the deceased lying dead on the floor when they entered with her two hands tied to the back and her mouth gagged. She was met naked, bruises were noticed on her private part, her mouth was covered among others.

“Also, a note said to have been written on a piece of paper was placed on her chest containing a message, “Unilorin doesn’t forgive”.

“The people later informed the police at F’ Division Police Station, who discovered the dead body, snapped the picture, and took the corpse to the University of Ilorin Teaching Hospital (UITH) for autopsy”.

He informed Commissioner of Police, Mohammed Bagega, has directed immediate investigation and arrest of the attackers.

Reacting to the development, Hon. Ganiyu Abolarin, representing Ekiti constituency in the Kwara Assembly, decried the growing insecurity in the State, demanding immediate investigation, apprehension and prosecution of the culprits.

He said: “I am deeply concerned about increasing cases of rape and brutality against the girl child in Nigeria.

“This gruesome murder of Olajide Blessing, who was allegedly raped to death in her home at Tanke, Ilorin, is one death too many.

“The action of the culprits horrific, condemnable and should not be condoned by any society.

“I, therefore, urge security agencies to speedily investigate, arrest and prosecute the culprits.

“The perpetrator(s) of this dastardly and barbaric act must be brought to justice, we must all seek justice for late Olajide Blessing.

“We must ensure that all the culprits responsible for this barbaric act are swiftly brought to justice. This nonsensical act of raping must stop in Nigeria. I want to extend my condolences to the family and friends of the victim.

“While I commiserate with the bereaved family on the loss of their daughter, I prayed God to grant Blessing’s soul peaceful rest. I also want to urge all our young people to be wary of the company they keep and the places they visited.”