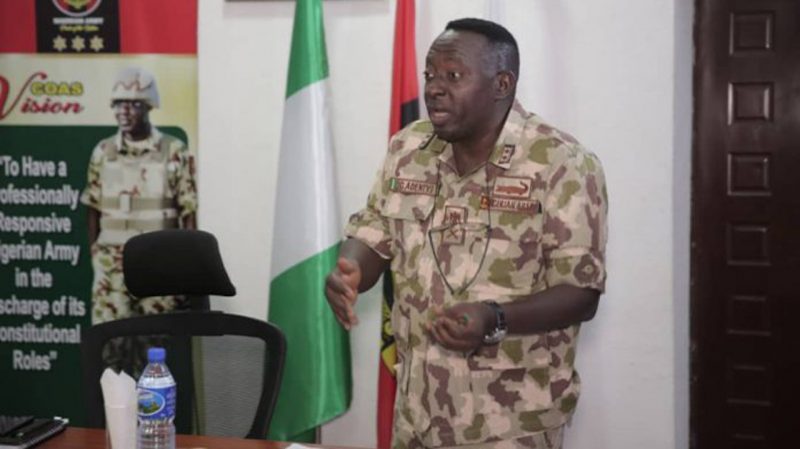 Buratai gave the commendation at a dinner organised in honour of Adeniyi at the Military’s Command Guest House, in Maiduguri, on Saturday night.

Burutai said that the emergence of Adeniyi as the Theatre Commander was a turning point in the history of the army’s war against terrorism.

He said that Adeniyi showed high level of dedication, commitment and understanding of the operational environment, which placed him in a very good state to achieve success as the commander.

“Adeniyi came at a point when virtually most of the FOBs were falling and his coming was a turning point in Lafiya Dole’s operation.

“He never led from the rear, he is always in the front; that is the type of leadership that is required and that is an excellent attribute of a field leader. I have always emphasised that you must lead by example.

“This one; no matter the lapses, no matter the inadequacies and no matter what happened, nobody can take that away from him as part of his successes.

“He came at a time when things were already crumbling and his leadership style turned things around to bring us to where we are today.

“He never led from the rear, he is always in the front; that is the type of leadership that is required and that is an excellent attribute of a field leader. I have always emphasised that you must lead by example.

“So Adeniyi, be rest assured that you have made your mark. You are leaving the Theatre, but you will be required to share the experience you have gathered here. You will be consulted accordingly,” he said.

The COAS also lauded other security agencies for their roles in ensuring successes in the counter insurgency campaign.

Maj.-Gen. Farouq Yahaya, the new Theatre Commander of OPLD, assured the COAS that he would do his best to achieve the vision, mandate and objective of the operation.

“The Theatre is out to achieve all the directives with the orders and instructions from the headquarters,” he said.

In his remarks, Adeniyi lauded the COAS for supporting him to serve under his supervision as Theatre Commander.

“I am very happy that, to the best of my knowledge, I have done everything in my power, and that I did not let you down, sir,” he said.

Adeniyi has now been redeployed to the Nigerian Army Resource Centre as Senior Research Fellow.

Access Bank in front in the Fight Against COVID-19