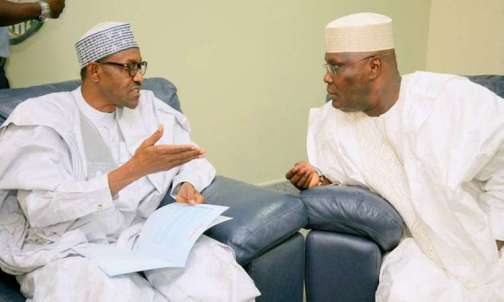 Nigeria’s former Vice President and Presidential candidate of the Peoples Democratic Party, PDP, Atiku Abubakar in his reaction to the 11 September dismissal of his petition against President Muhammadu Buhari’s election, appeared to be posturing as a victim of injustice and has resorted to evoking subtle threats of eternal damnation to all blocking his path.

Atiku who had tried to unseat Buhari by pleading at the presidential tribunal that he had more plural votes via a server vote tally unknown to the Independent National Electoral Commission, Buhari’s ineligibility for election and electoral fraud said he will pursue his case until he gets justice.

But he has a bad case, the tribunal unanimously ruled on 11 September and dismissed his petition in all its entirety.

The former vice-president, who is reportedly in Dubai on vacation, has six more days to file an appeal at the Supreme Court to make his dream for his self-defined justice possible.

In his statement on Friday, Atiku canvassed for belief from supporters in Nigeria that the Supreme Court could give him the ‘justice’ he wants, while at the same time dropping subtle threat of eternal damnation to those blocking him, by saying: “Finally, I say to all concerned, that we will all die and give an account of our lives to our Creator”.

In his statement on Friday, Atiku canvassed for belief from supporters in Nigeria that the Supreme Court could give him the ‘justice’ he wants, while at the same time dropping subtle threat of eternal damnation to those blocking him, by saying: “Finally, I say to all concerned, that we will all die and give an account of our lives to our Creator”.

“I urge all Nigerians to continue their support for this recourse to constitutional order via the courts. Even if there is little or nothing you can do to ensure that justice is done in Nigeria, just believe that it will happen. Let us never underestimate the effect of our belief in Nigeria”, he said.

According to Atiku, nothing good comes easy, saying that hard as the task to rid Nigeria from the forces of fascism, and be an instrument for the full restoration of the rule of law and democracy in Nigeria was, Nigerians supported him in making the struggle worthwhile.

“I owe so much to this great land of Nigeria that took me from the streets of Jada, where I sold firewood, to the heights I have attained, by God’s benevolence, in the civil service, in corporate Nigeria, and in public service.

“If I do not play my part in making it possible for other orphaned children, indigent youths and the less privileged, to replicate and even surpass my path to significance, I would have failed my Maker. If I do not ensure that the ladder I climbed remains accessible to those at the bottom, middle and top tiers of society, I would not have fulfilled my purpose.

“And only by ensuring that democracy is not just done, but seen to be done, can Nigeria and Nigerians have a sense that this our dear land is indeed a land where Unity, Faith, Peace and Progress reside. It is for this, and other patriotic reasons, that I am pursuing this judicial route: To ensure that the votes of Nigerians count and are counted,” he said.

He said those who did not want this as Nigeria’s reality, would use every trick in the book to undermine, discourage, misinform and mislead, but that with God’s help and the support of Nigerians, he and his party would ensure that Nigeria made a course correction away from tyranny and towards democracy.

Atiku said Nigeria must return to being Africa’s bastion of democracy, where the rights to Freedom of Speech and Freedom after the Speech, were guaranteed and that Nigerians must stand together to pursue this just cause all the way so that the judiciary was not afraid to do their jobs and had to be wary of blackmail, intimidation, and victimisation.

“I note the immense outpouring of goodwill from ordinary Nigerians in every nook and cranny of Nigeria and from all regions, religions and relationships. Once again I thank you all for your support. I also thank the governors elected on the platform of my party, the Peoples Democratic Party, as well as the National Executive Committee, for their unanimous and unambiguous support for the judicial phase of this struggle, especially after it was announced that we would go on to appeal.