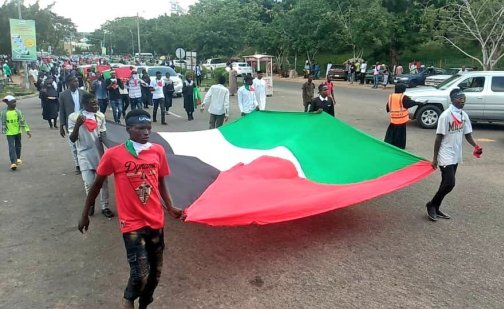 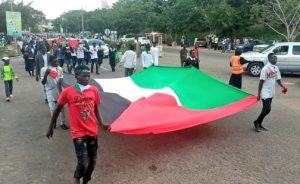 Shiites in a procession

Nigeria’s Shiite community will be on the march today in celebration of a religious ritual, despite the police calling it an act in “advancement of terrorism”.

Spokesman of the banned Islamic Movement of Nigeria, Ibrahim Musa said the march will be a peaceful one and it is a religious duty.

” We want the world to however note that our event tomorrow is a peaceful solemn mourning procession that would not harm anybody and it is a religious duty to us. Similar mourning events and processions, like all other religious duties and obligations, are seen to be observed worldwide.

“It is worth remembering that in all the years since the Ashura procession started in Nigeria, participants have never once resorted to violence even in the face of a bloody history of attacks against them by the brutal might of the state”.

Musa in a press statement accused the police and the government of plotting to kill to kill innocent security personnel, journalists and some members of the public so as to later put the blame on members of the Islamic Movement just as they did in July, 2019 in Abuja.

“We therefore call on security personnel, journalists and members of the public to be particularly extra vigilant. The general Public, media and the international community should now hold the government responsible for the false flag operation should violence breakout during our usual Ashurah commemoration tomorrow Tuesday.

“The government has already sponsored banner headlines in select Nigerian Newspapers, obviously in preparation for falsely unleashing unprecedented violence in our name. We want the world to however note that our event tomorrow is a peaceful solemn mourning procession that would not harm anybody and it is a religious duty to us. Similar mourning events and processions, like all other religious duties and obligations, are seen to be observed worldwide.

“The government and anyone else involved in these nefarious plans must therefore be called to order, to uphold the rights of the participants and ensure their total protection everywhere. The Buhari government should particularly be held responsible for any harm that may be inflicted on the persons and properties of Ashura mourners or indeed anyone”, Musa said.

On Monday, the Inspector General of Police Mohammed Adamu ordered commissioners of police and Assistant Inspectors-general to avert any planned procession and/or disruption of public peace by the Islamic Movement in Nigeria, anywhere in the country.

The IGP enjoined the public to avail the Force with useful information as regards the activities of the proscribed Islamic Movement in Nigeria.

Adamu also advised parents and guardians to prevail on their children and wards not to be cajoled into embarking on illegal and ill-motivated activities by anyone or group of persons, under any guise whatsoever

“It has come to the knowledge of the Nigeria Police Force that some members of the proscribed Islamic Movement in Nigeria (IMN) intend to embark on a nationwide procession, ostensibly to cause disruption of public peace, order and security in the Country.

“The Force notes that in line with the Terrorism (Prevention) Proscription Order Notice 2019 of 26th July, 2019, the activities of the Islamic Movement in Nigeria have been proscribed. Consequently, all gathering or procession by the group remains ultimately illegal and will be treated as a gathering in the advancement of terrorism”.

*DEMOLITION OF MOSQUE IN RIVERS STATE?* *ONE NATION, TWO SYSTEMS*