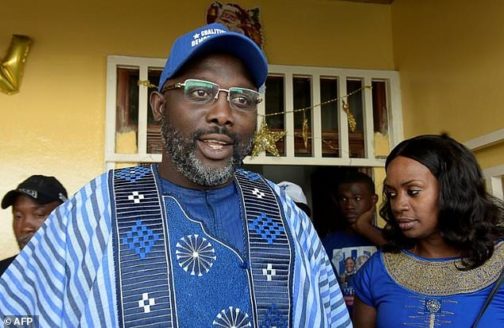 Liberia’s President-elect, George Weah, has declared that social transformation especially at the grassroots would be the “singular mission and focus’’ of his administration.

Weah made the promise while delivering his victory speech at his party’s headquarters in Monrovia on Saturday.

He pledged to improve the lives of ordinary Liberians through the instrumentality of pro-poor governance.

He also promised to tackle corruption, which is a big issue in the country, and improve the business environment to attract investments.

“I declare publicly today that transforming the lives of all Liberians is the singular mission and focus of my presidency.

“Over the next few days, we will assemble the government that is committed to fighting for the ideas that inspired our campaign, and dedicated to delivering for the Liberian people.

“Those chosen to serve will and must be dedicated to the ideas of grassroots social transformation.

“Partisans looking to cheat the Liberian people through the menace of corruption will have no place in my administration,’’ he declared.

Weah thanked outgoing President Ellen Johnson-Sirleaf for sustaining peace in Liberia over the last 12 years, and for her commitment to the first democratic transfer of power in 73 years.

He said his administration would build on the institutional gains made by Sirleeaf, but quickly assured that change would be made where necessary.

The president-elect said the country was open and ready for business, calling on investors, partners and Liberians in the Diaspora to join hands with his administration to build the economy.

“We will work to relax constraints to private investment, strengthen the business, legal and regulatory environment, and protect business profits,’’ he said.

Weah extended a hand of fellowship to his rival in the just-concluded presidential runoff election and outgoing Vice President Joseph Boakai, saying he will be counting on his advice and contributions.

The News Agency of Nigeria (NAN) reports that expectations are high especially among young Liberians, his support base, for job creation and poverty reduction.

While he was delivering the address from the party’s conference room, a crowd of singing and dancing youths gathered outside the building.

They held placards and banners bearing inscriptions such as “CDC will support agriculture’’.

Thirty-four-old Lawrence Menden, an IT professional, said he had no doubt in the ability of Weah to “take Liberia out of the woods’’.

“Some people do not believe that Ambassador Weah has what it takes to perform as President, but they should wait and see; the man will surprise them,’’ he said.