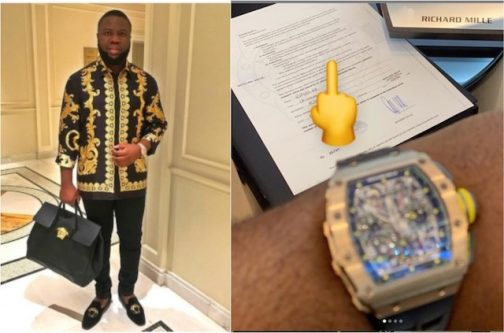 Hushpuppi with the Richard Mille watch bought in December 2019, after hitting Qatari man

Apart from his array of Luxury cars such as Rolls Royce, Bentley Bentayga SUV, Bugati and so on, Nigeria’s internet con artist, Ray Hushpuppi also has a taste for luxury watches.

“God’s time is the best, especially when you checking it from a $150,000 Richard Mille Watch”, he wrote on Instagram. 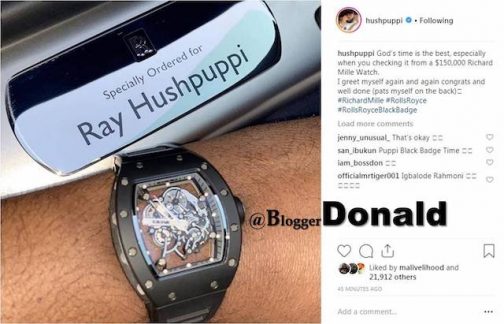 At today’s exchange rate, it is worth N94million at official rate and N120.75 million at BDC and Black market rate.

The RM11-03 watch got a prominent mention in the plea bargain deal reached between Hushpuppi and the U.S. Attorney Office for California Central Division. 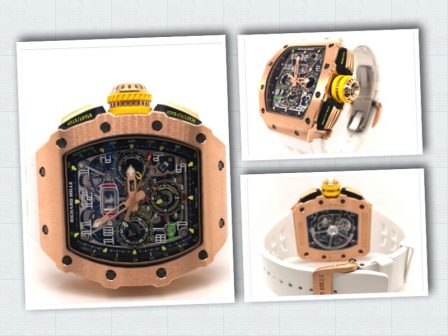 Ray Hushpuppi certainly got a discount at the time he bought it in December 2019, from the proceeds of one of his crimes.

The victim was a Qatari businessman looking for a loan of $15million to establish an international school in Qatar.

Hushpuppi and collaborators preyed on him, promising to arrange the loan.

A Wells Fargo account was opened for the man’s business in California and thereafter the demands for money began.

“After Coconspirator B arranged to file the fictitious business name statement and open the Wells Fargo bank account ending in 5320 (the “Wells Fargo Account”), defendant directed a coconspirator in Nigeria (“Coconspirator C”) to create a false and fraudulent “power of attorney” document bearing the name of the Qatari Victim Company.

“Defendant then sent information relating to the Wells Fargo Account, as well as the “power of attorney” document, to the Victim Businessperson on or about December 19 and 20, 2019, in order to further the fraud scheme.

“The Victim Businessperson made those wire transfers to these bank accounts, both of which were in the United States, on or about December 26, 2019.

“Defendant used the funds from those wire transfers for his personal benefit, and none of the funds were used as defendant and Coconspirator A promised the Victim Businessperson.

“Defendant used the wire transfer of $230,000 to purchase a luxury Richard Mille RM11-03 watch. Defendant arranged for the watch-seller to have the watch available in the New York metropolitan area, where Coconspirator D picked it up.

“Defendant then directed Coconspirator F to transport the watch on a flight from John F. Kennedy International Airport in New York to the United Arab Emirates, where Coconspirator F delivered the watch to defendant on or about January 4, 2020”