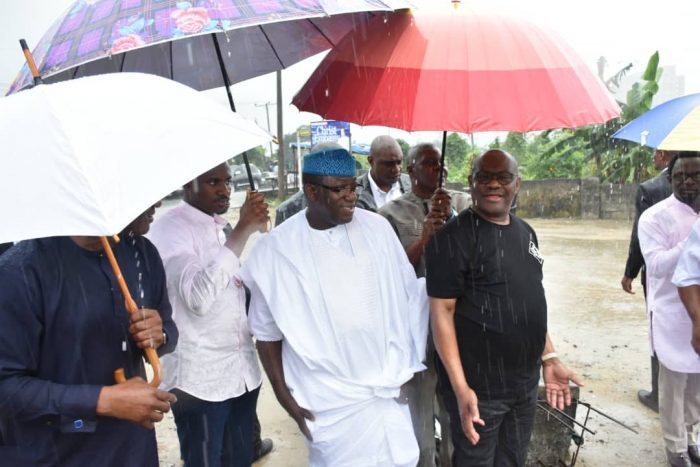 Fayemi and Wike at the site of the ‘demolished mosque’[/caption]

The Governor of Rivers, Nyesome Wike on Sunday said he has nothing against Islam or any other faith.

Wike made the remark while showing the Chairman of the Nigeria Governors’ Forum (NGF) and Governor of Ekiti State, Dr Kayode Fayemi the site of the mosque he allegedly demolished in Port Harcourt.

A statement issued by NGF’s Head of Media and Public Affairs, Mr. Abdulrazaque Bello-Barkindo in Abuja, said that Fayemi was in Port-Harcourt to verify the true situation about the issue.

Wike claimed that there was no mosque at the site, but a sewage line.

“I have nothing against Islam or any faith for that matter.

” As you can see there was never a mosque on this ground instead it is a sewage site which has been in contention between the state government and some groups because they want to develop on prohibited land.”

Wike appreciated the NGF Chairman, who was accompanied by the Director General of the Forum, Mr Asishana Okauru, for taking time to visit and verify the truth about the situation.

He also commended Fayemi’s leadership style which he described as exemplary, noting that he did not join those who rushed to judgement on the matter.

According to the NGF statement, “those who yelled about the demolition were being plain mischievous.”

It said “there was nothing there to show that a mosque ever existed on the site.”

It recalled that the Sultan of Sokoto and President of the Jaamatul Nasir Islam, the umbrella body of all Muslims in Nigeria, Sa’ad Abubakar had earlier called for caution on the matter.

Abubakar called for restraint by Muslims in their reaction to the alleged demolition of the mosque in the Trans Amadi area of Port Harcourt.

Abubakar in a statement issued in Kaduna, said that caution and restraint was necessary to allow the leadership of the Muslim Ummah “find a lasting solution with wisdom” on the said demolition of the mosque.

The Sultan had enjoined Muslims to be guided by the Qur’anic teaching of introspection and perseverance, truthfulness and sincerity.