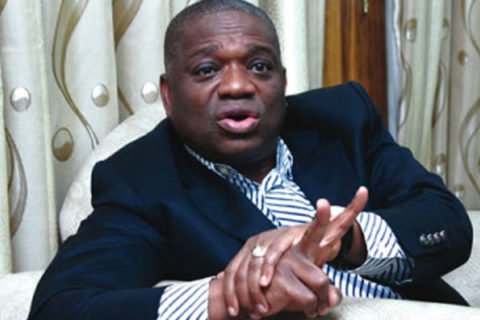 Kalu, his company, Slok Nigeria Limited and one of his Director of Finance and Accounts, Udeh Jones Udeogu, are being tried before Justice Mohammed Idris of the Federal High Court, Lagos on charges bordering on N2.9 billion fraud, by the Economic and Financial Crimes Commission (EFCC).

They were accused of conspiring to siphon N2.9bn from the account of the Abia State Government House but they all pleaded not guilty.

At Wednesday’s proceedings, Adesomoju, who was led-in-evidence by the prosecutor, Mr. Rotimi Jacobs (SAN), narrated to the court how several millions of Naira was paid through bank drafts into Sloks Nigeria Limited’s account domiciled in Apapa branch of First inland Bank, between 2001 to 2005.

In giving the details how the monies were paid into Slok’s account, the witness said between August 16 and December 6, total sum of N110 million were paid in tranches of N20 million, N13 million, N17 million, and N40 million.

He also narrated before the court how the some of N200 million, N550 million, N157 million, and N134 million, were also paid in tranches between 2002 to 2005, into the account of Slok Nigeria limited, through bank drafts.

Though, the witness who told the court that he was a Youth Corps member, when the transactions was carried out, did not tell the court the source of the drafts and the person that paid them into the account.

The matter has been adjourned till Tuesday for the defence to cross-examine the witness, and continuation of trial.

The EFCC, in the charges, alleged that while Orji Uzor Kalu was Governor of Abia State, he siphoned funds running into over N2.9bn from the state’s treasury.

The ex-governor was accused of diverting state funds into the account of Slok Nigeria Limited, a company, the EFCC claimed was owned by Kalu and his family members.

The offence is said to be contrary to Section 17 (c) of the Money Laundering (Prohibition) Act 2003 and punishable under Section 16 of the same Act.

The EFCC accused Slok Nigeria Limited of conniving with one Emeka Abone, said to be at large, to help Kalu retain the allegedly stolen funds in its accounts, when Slok Nigeria Limited “knew or at least suspected the said Orji Uzor Kalu to have engaged in a criminal conduct.”

The EFCC said the company is liable to punishment under Section 16 of the Money Laundering (Prohibition) Act 2004.

The second defendant, Udeogu, was accused of helping Kalu to pay part of the allegedly stolen funds into the account of Slok Nigeria Limited with the defunct FinBank Plc.

The offence is said to be contrary to Section 427 of the Criminal Code Cap 77, Laws of the Federation of Nigeria, 1990.

The accused,who are currently on bail, however, pleaded not guilty when the charges were read to them.