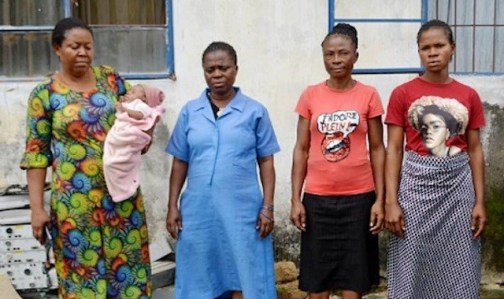 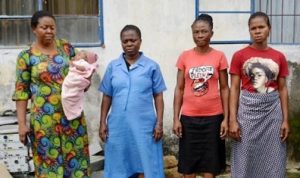 A man in Imo state, east of Nigeria, made the police arrest his wife after suspecting she sold their newborn baby.

Promise Ukaonu, reported the wife, Chinaza to the police, suspecting she was lying when she told him the child was still born.

Chinaza had left home, when she was almost due to deliver, on the pretext that she was going to spend some time with her brother, who stays in another town.

When she returned, there was no baby, as she claimed the baby was delivered dead and disposed off. Promise sensed foul play and insisted on seeing the remains of the baby. His insistence brought the police into the matter.

The police waded in, arrested Chinaza, and two nurses, Esomonu Dorothy and Eke Catherine, who had taken delivery of the baby and the buyer, Chioma Amadi, who paid N500,000.

In a report by Vanguard, the police PRO Orlando Ikeokwu narrated how the arrests were made and the baby recovered:

“It is noteworthy that Chinaza Ukaonu, left the house on the said day with an eight (8) months old pregnancy on the pretext that she was going to stay awhile with her brother who stays at Ubomiri, Mbaitoli LGA.

“Upon investigation, the husband, one Promise Ukaonu, discovered she wasn’t there.

“However, a month later he received a call that his wife had a still born. When he demanded to see the remains of the child, the wife told him that she wrapped it in a nylon bag and disposed of it. Not satisfied with the story, he reported the matter to the Police, which led to the arrest of Chinaza Ukaonu, who then confessed of having sold the child to Amadi Chioma, for the sum of five hundred thousand naira (N500,000), with the help of the two nurses Esomonu Dorathy, and Eke Catherine, who assisted her through the child birth.

“However, the child has been recovered and investigation is at advance stage.”

The Commissioner of Police in the state, Rabiu Ladodo, said all the people involved in the child sale must be prosecuted.

AFRIMA: Final nominees list for 6th edition is out

BBN: You will never win when I am here – Mercy tells Ike in a heated argument