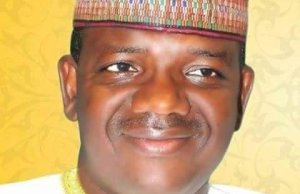 As preparations toward 2019 general election is gathering momentum, PDP gubernatorial candidate for Zamfara State, Hon. Bello Matawalle is leaving no stone unturned to ensure that he becomes next governor of the State cone 2019.

Findings reveal that the amiable politician is enjoying tremendous support from all the stakeholders in Zamfara State..

Matawalle, who is a leading contestant in the State has since unveiled his developmental agenda in the interest of the state.

He centres his agenda on five points namely: Employment Generation and Wealth Creationn; Power Generation and Infrastructural Development; Security, Good Governance and Fight against Corruptions; Qualitative Education For All and Health Services and Agriculture.

Bello Muhammad Matawallen Maradun was born in Maradun
the headquarters of Maradun Local
Government Area of Zamfara State to the family of Alh. Muhammadu Sharu on the 12th December 1969. Studied at Thames Valley University, London, Yaba College of
Technology, Lagos, VTC Bunza in 1984 and Maradun Township Primary School in the year 1979. He worked under ministry of Health Sokoto (in former sokoto state)
and worked as a teacher in Government Girls College Moriki and Kwatarkoshi before joining
Federal ministry of water resources, Abuja until he decided to enter politics in 1998 under defunct UNCP,

Married to Hajiya Sadiya, Hajiya Fatimatu, Hajiya Balkisu and
Hajiya Fadimatu (2nd) and he is happily blessed with children.

Bello Muhammad began  his career in politics in 1998, having joined the United Nigeria Congress Party (UNCP)  and contested for National Assembly Membership and won
the seat before it was  dissolved.

May 2003 – 2007 Bello Muhammad was elected as Member Representing Bakura/Maradun
Federal Constituency under ANPP. In the House he served as chairman House Committee on Ethic and Privileges,  the Position he held till 2007, Deputy Minority Whip and Ad- hock Chairman House committee on Marine Security and
Safety Commission (National security adviser’s office).

2007- 2011. Matawallen Maradun having been re-elected as Honorable Member Representing Bakura/Maradun Federal Constituency decided on the interest of his people to decamp from ANPP to PDP which he did in the year 2009. The party he maintains and will be maintaining up ward! He emerged as the
winner after April, 2011 general election to go back again on his third term as Member representing his people (Bakura Maradun) under Peoples Democratic Party (PDP).

Meanwhile, polity watchers are of the opinion that Bello Matawalle stands a good chance to win the governorship election come 2019. It would be recalled that INEC is claiming that APC does not have governorship candidate for 2019 gubernatorial election, development which is a plus for Matawalle’s governorship ambition.