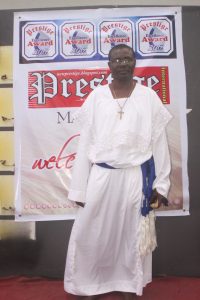 Prophet Surrey lteimoh Jacob, shepherd in charge of Celestial Church of Christ (CCC), Asore central Parish 1, has predicted that come 2019, the ruling party, All Peoples Congress (APC) will win presidential election. The man of God disclosed this among others in his prophecies for the year 2018.

He also disclosed that Nigerian youths will play prominent roles in the next general elections; the oracle of God said he sees youths hijacking power and seeking relevance in the scheme of things politically.

“ APC flag still remains the presidential winning flag in 2019 and  In 2019 election, l can see the youth hijacking the post of the president, so President Muhammadu  Buhari needs to pray very well”, Prophet Surrey said.

Below are his other prophecies for the year:

* It was revealed to me how Satan installed demons in various locations of the world to afflict peoples and men of God.  And that they should work hard because Satan has prepared a better place for them in his kingdom (Hell fire).

* Nigeria team, Supper Eagle will be winning Gold, Bronze and Silver medals in world cup matches, if they allow love and unity to reign in their camp.

* New political parties will be formed this year, but cannot pull enough crowd to compete with the ruling party

* There will be wonders and signs, manifestations of God’s power in Celestial church of Christ worldwide and lmeko City cathedral will be built with glass just like Awolowo House in lkeja

* Unification of Celestial church of Christ is going on spiritually and physically by God Almighty and at the end of it one fold, one shepherd, one pastor. John 10:16.

* Nigerians should fast on October 1st for repentance, peace and stability of the country.

Businessman Sent To Prison For Stealing $38,000