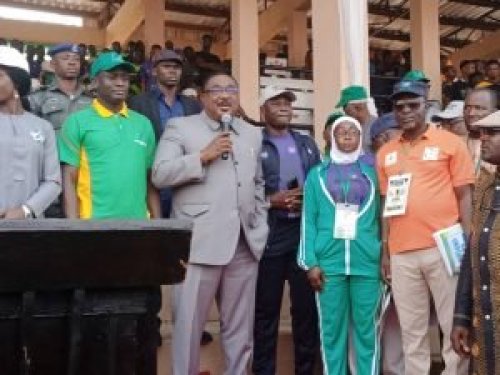 No fewer than 3,040 athletes from across the country have converged on Ilorin to participate at the 20th edition of Nigeria polytechnics games (NIPOGA) holding at the Kwara capital from Feb. 5 to Feb. 16.

The biannual Polytechnic games will feature not less than 51 institutions that will compete for honours in 14 sporting events.

Declaring the games open at the Kwara state polytechnic sports complex, the state Deputy Governor, Mr Kayode Alabi urged the participating institutions to abide by the rules of the games.

He added that through sacrifices, perseverance and hard work, the games would play a significant role towards boosting the federal government’s efforts in nation-building.

Alabi restated the state government pro-activeness in bringing change to the sports sector through active participation in sporting activities.

He advised all participating institutions, athletes and officials to display a high level of discipline and tolerance during and after the games as he assured them of a peaceful stay in the state of harmony.

The deputy governor also stressed that the games will further foster unity and create mental alertness among the participating institutions.

Mohammed noted that the host institution has excelled in several fields of endeavour, especially in the areas of sports and entrepreneurship and stand out as an institution to beat in the comity of institutions.

Climax of the opening ceremony of the biannual polytechnic games was the unveiling of the mascot, lighting of the torch of unity and match past by participating institutions.

As at the time of this report, a match between host institution, Kwara State Polytechnic and Federal Polytechnic, Oko, Anambra, which was part of the opening ceremony remained goalless.

Other top government officials and top dignitaries that graced the occasion were the speaker, Kwara state house of Assembly, Yakubu Danladi, the Emir of Ilorin, Alhaji Ibrahim Zulu Gambari, Alhaji Issa Logun (Chief of Staff) among others.