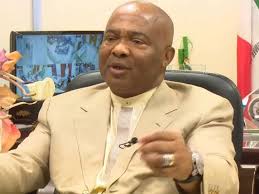 The new Governor of Imo State, Senator Hope Uzodinma, last night called for the probe of three former governors of the state.

The governor who gave the order in his inaugural speech immediately he was sworn in, ordered the Accountant General of the state to within four days from yesterday forward to him the comprehensive financial status of the state from May 29, 2010, till date.

He equally ordered all permanent secretaries of all the ministries in the state to within the same period forward to him the status of all the contracts awarded.

The governor ordered the immediate stoppage of payment of all ongoing contracts in the state.

He said that his administration was anchored on rehabilitation, reconstruction and recovery.

According to him, he would revive the state and make it working again.

Uzodinma said that he had forgiven those he said conspired to “rob me of hard-earned victory”.

He said that the judiciary demonstrated huge bravery by declaring him the duly elected governor of the state.

Uzodinma said that he was dedicating his victory to God.

Speaking earlier in Abuja after collecting his Certificate of Return from INEC, Uzodinma described the litigation process he went through as part of the democratic process, saying, “There must be a challenge here and there, but you must develop a thick skin and strength to follow through litigation.

“That is what we did and the first court did not do what we wanted. The second court followed through, but the Supreme Court used its eagle eye and gave us victory.

“We owe this victory to God Almighty. We owe it to the functional judiciary. That our judiciary is working and the Supreme Court worked to expectation.

“The people of Imo have not been denied their choice of leadership and the efforts they made during the election. It is something we must be grateful for,” Uzodinma said.

I am not owing workers of GOTEL, Atiku Abubakar opens up