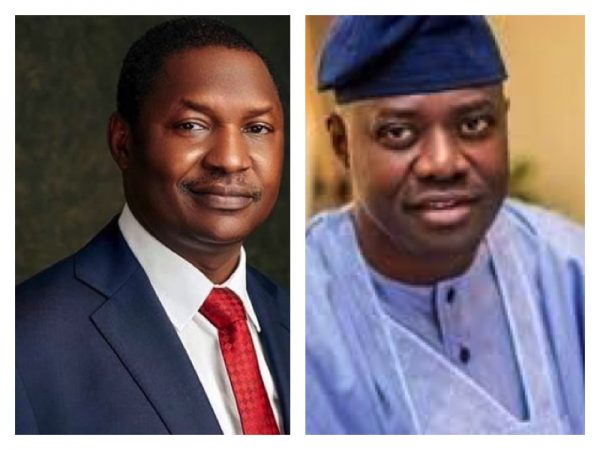 Mr Abubakar Malami, Attorney-General of the Federation and Minister of Justice has stepped into the sack of Oyo State Council Chairmen by Governor Seyi Makinde.

Malami said Makinde’s action is illegal and asked the governor to disband the caretaker committees he set up at the councils last December.
In the letter from AGF and sent to Oyo State Government through the State Commissioner of Justice, Prof. Oyewo Oyelowo, Malami asked Makinde to restore the sacked council Chairmen according to the law.

It was gathered that the letter dated 14 January, 2020 was entitled; “Unconstitutionality of dissolution of elected local government councils and appointment of caretaker committee: The urgent need for compliance with extant judicial decisions.”

It would be recalled that Gov. Seyi Makinde had on assumption of office in May 2019, dissolved the elected local government executives in the state, a year into their administration.
Following the sack, the governor had in December 2019 inaugurated caretaker committees for the 33 local governments and 35 Local Council Development Areas (LCDAs) in the state.

“The need to immediately disband all caretaker committees and restore democratically elected representatives to man the local governments has therefore become obligatory,” Malami said.
Malami requested that the commissioner take positive steps to ensure compliance, adding that the president and other relevant agencies would advise on further compliance measures to be taken in national interest.

“To this end, I hereby request all their Excellences, State Governors and Speakers of State Houses of Assembly, who are currently acting in breach of the provisions of Section 7(1) of the 1999 Constitution (as amended).
“And also acting in disobedience of the Supreme Court judgment highlighted above to immediately retrace their steps by ensuring compliance with the above in the overall interest of the rule of law and our democracy,” it said.
Malami said that copies of the letter had been sent to the IGP, DSS, EFCC and NFIU.

Supreme Court Judgement on Imo Gubernatorial Elections has destroyed the trust and sympathy Nigerians have in the Judiciary and its Custodians: Doherty, Lagos State PDP Chairman