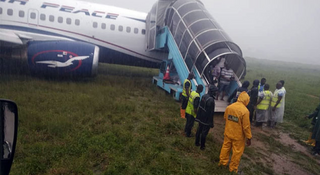 A plane belongs to Air Peace Saturday overshoots runway at Port Harcourt airport and skidded into the bush at the Port Harcourt International Airport, Omagwa in Rivers State.

The incident, which was said to have happened about 4pm, caused panic among airport officials.

It was gathered that no life was lost and none of the passengers was injured as they left for their various destinations shortly after the incident.