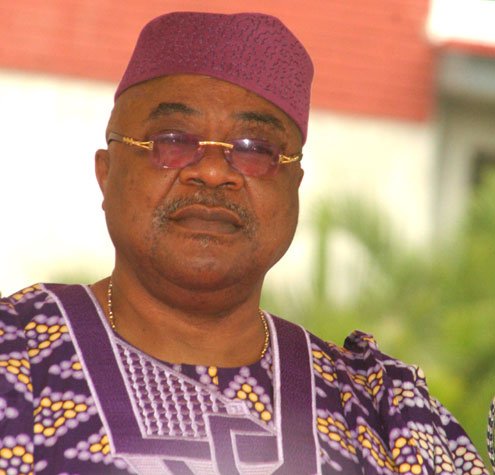 Former Governor of Oyo State, Adebayo Alao-Akala and two others were on Monday re-arraigned by the Economic and Financial Crimes Commission, EFCC  at the Oyo State High Court, in Ibadan over alleged N11.5bn fraud.

According to the News Agency of Nigeria, other defendants are a former Oyo State Commissioner for Local Government and Chieftaincy Matters, Senator Hosea Agboola; and an Ibadan-based businessman, Femi Babalola.

The defendants are facing 11 counts bordering on conspiracy, awarding a contract without budgetary provision, obtaining by false pretence, acquiring property with money derived from an illegal act and concealing the ownership of such property, among others.

EFCC’s counsel, Dr. B. Ubi, told the court that when Alao-Akala was the governor of Oyo State, he awarded a road contract worth N8.5bn between 2007 and 2009 to Pentagon Engineering Services.

Ubi alleged that the firm, owned by Babalola, handled the contract on behalf of the 33 local governments without budgetary provision.

The counsel further claimed that Alao-Akala ordered the supply of drilling machines on behalf of the 33 local governments in the state to the tune of N3.5bn.

The prosecutor told the court that Alao-Akala also illegally acquired some property on Old Bodija road, off Rotimi Williams road, when he was the governor of the state.

He said the offences contravened Section 22 (4) of the Corrupt Practices and Other Related Offences Act and Section 1 (18) of the Advanced Fee Fraud Act.

The defendants, however, pleaded not guilty to the charges.

Mr. Hakeem Afolabi, a Senior Advocate of Nigeria and counsel to Alao-Akala and Babaloa prayed the court to exercise its discretion in granting bail to the defendants.

Afolabi said the charge before the court was not a fresh one but a re-arraignment.

He said the matter was first filed on October 11, 2011 before Justice Moshood Abas and bail was granted after the defendants met the conditions.

NAN recalls that the defendants had also appeared before Justice Akintunde Boade and Justice Bayo Taiwo who was recently transferred out of Ibadan Division.

Afolabi urged the court to allow the defendants to enjoy their earlier bail conditions.

Mr. Richard Ogunwole, another Senior Advocate of Nigeria and counsel to Ayoola, aligned with the submission of Alao-Akala’s counsel.

The EFCC’s counsel said he would not oppose the bail applications.

Justice Muniru Owolabi granted the defendants’ prayers and adjourned the case till April 16 for trial.