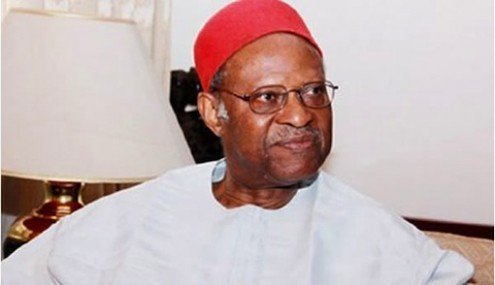 Anyaokwu gave the advice in Lagos at the “Night of Tributes and Music’’ organised as part of funeral programme for late Dr Alex Ekwueme on Friday night.

Anyaoku said Nigeria would be better if the political class imbibed the spirit of sportsmanship and shun do-or-die politics.

He described Ekwueme as a man of peace, who practiced politics without bitterness and stressed the need for leaders to emulate his style.

“The late Dr. Ekwueme was a man of peace, a man who practiced politics without bitterness, a man whose politics was without violence.

“When his political party, the People’s Democratic Party (PDP) chose Chief Olusegun Obasanjo ahead of him as its presidential aspirant, he did not bicker, he didn’t fight.

“Rather, he accepted the result and went ahead to campaign vigorously for the man chosen by his party.

“This is the kind of politics that can move the country forward. Politicians have a lot to learn from him,’’ he said.

The former Commonwealth secretary-general also described Ekwueme as a man of value and integrity, who impacted positively on the polity and people around him.

He said the way he played his game as a politician and a leader was a lesson in tolerance, team spirit and service.

Fayemi decried the predilection of some politicians to practise politics of violence and destruction which he said was a threat to democracy.

The minister urged politicians to emulate Ekwueme’s “intellectual politics’’ to give more value to governance and democracy.

“The former Vice-President displayed intellectualism in politics, he was a man of peace, a man of honour and integrity.

“Our democracy will be better if politicians emulate Ekwueme’s style of politics without bitterness,’’ he said.

In a video tribute relayed at the programme, the Minister of Works, Power and Housing, Mr Babatunde Fashola said the nation’s democracy would be better if leaders and politicians emulated Ekwueme’s rancour free style of politics.

“He was a man that did his best for the nation and democracy. He would be remembered for his integrity, his values and the peaceful way he practised politics.’’

A former Governor of Ogun State, Chief Segun Osoba described Ekwueme as a leader with vision, and a politician with passion.

He said he would be forever remembered for politics of peace and reconciliation.

A renowned social commentator and politician, Prof. Pat Utomi said one of Ekwueme’s greatest assets was his integrity.

He said most of the challenges the country was facing were due to dishonesty by leaders.

Utomi urged the political class to emulate the great political ideals of integrity and service to better the lots of the society.

In his remarks, a foremost businessman, Chief Tony Elumelu and the Chairman of Seplat Petroleum, Dr Ambrose Orjiakor took turn to extol the virtues of late Ekwueme.

Elumelu described him as a man of sterling qualities who made great impact on democracy and the nation.

Orjiakor said the late Vice -President’s life and times were replete with values that could make the nation greater if emulated by everyone.

The highlight of the evening was when Ekwueme’s school mates at King ‘s College, Lagos gave a rendition of the school’s anthem to honour the deceased.

The old boys led by former minister, Chief Phillip Asiodu and a chieftain of the All Progressives Congress, Alhaji Kashim Imam delivered the lyrics dexterously to the admiration of all, drawing rapturous applause from the audience.

Children of the deceased, who couldn’t hold back their emotions, thanked the old boys for the anthem and everyone for coming.

The night was spiced with interludes of music by a choir led by renowned music expert, Prof. Laz Ekwueme.