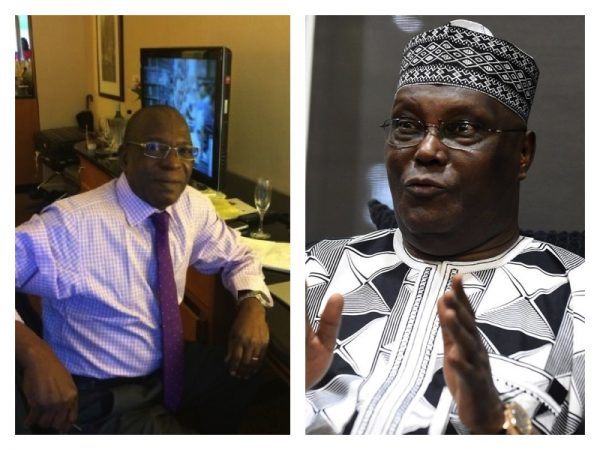 John Chiahemen, the man accused by former Vice President Atiku Abubakar of disappearing with the N150m he claimed he paid to settle the bills of foreign consultants hired by his media company GOTEL has fired back.

In an exclusive exchange with P.M.NEWS, the Nigerian TV producer and editor now based in South Africa hinted about suing Atiku for libel as he revealed that his lawyers, who are very familiar with the matter, will be “responding adequately on my behalf in the first instance in the coming hours”.

He described Atiku’s statement as ‘shameful and libellous’.

In a statement on Thursday, Atiku Abubakar sought to extricate himself from unpaid claims running into thousands of dollars by consultants hired for his Yola-based media company, GOTEL. He heaped all the blame on John Chiahemen, the Ahmadu Bello University alumnus, who he said GOTEL hired in 2003 ” to lead the planning, design, build-out and rollout of TV Gotel Africa to be based in Abuja”.

“To this end, Chiamehen was given a free hand by the founder and board of the company to run the affairs of Gotel.

“Requisite resources, as requested by Chiamehen were made available. On his own part, Chiamehen had committed to a revenue profile of N150 million, among others.

“But by 2016, there were concerns that the Chiamehen management was only long in promises and short in performance, prompting the then board to empanel an adhoc visitation committee to examine the state of the company. The findings of that committee were damning.

“Consequently, the committee recommended the need for a comprehensive audit of the company. The audit revealed serious fiduciary infractions by the Chiamehen led management.

“Further to the audit report, a board meeting was convened to consider the auditor’s report. However, before that meeting, Mr. John Chiamehen bolted and has refused to make himself available to account for the huge resources put in his charge.

“For the avoidance of doubt, the funds dedicated to the payment of salaries of staff, both local and expatriates that were engaged by Chiamehen himself were made available to him. All those concerned are advised to contact Mr. Chiamehen accordingly.

“On the 14th of December 2016, a formal petition on alleged breach of trust, fraud and misappropriation of funds against the former managing director/CEO was filed at the FCIID (Interpol) for investigation.

“Mr. Chiamehen is encouraged to make himself available to give account of all monies put in his charge during his tenure as MD/CEO of Gotel”.

Atiku’s statement was signed by Paul Ibe, his media adviser.

A LAWYER CANNOT ENGAGE IN THE BUSINESS OF SELLING LANDS FOR CLIENTS, SAYS COURT