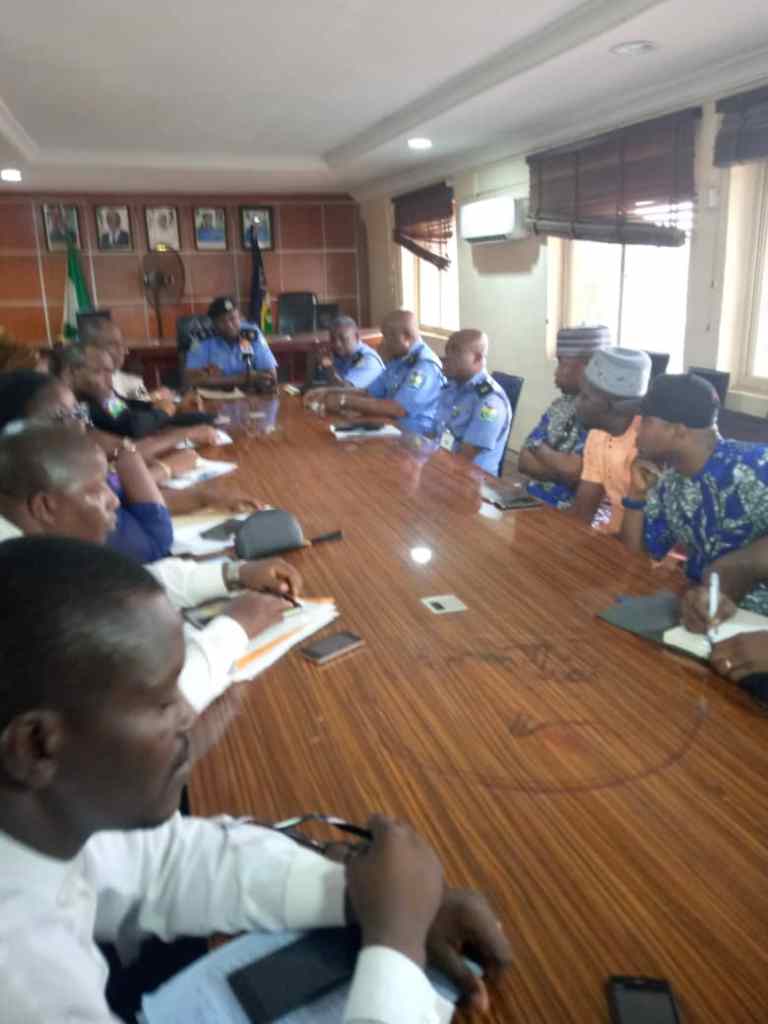 Members of National Union of Road Transport Workers, Lagos State Branch led by its Chairman, Alhaji Musiliu Akinsanya popularly known as MC Oluomo on 17h January 2020 has signed a peace accord in the presence of the Lagos State Commissioner of Police, CP Hakeem Odumosu and his team.

The meeting was convened in respect of the perennial crisis rising from Lagos Island unit of Lagos State NURTW.
Leaders of the group fermenting the trouble Azeez Adekunle AKA Kunle Poly and Mustapha Adekunle AKA Sego were made to sign peace bond to ensure there is no reoccurrence of such ugly incident.

While the Commissioner of Police welcome them to the command and said we are all living witnesses to what happened in Lagos Island recently where people were injured and vehicles vandalized, we cannot fold our arms and allow such to continue happening. The cause of the clash is between two factions of NURTW on Lagos island. About four weeks ago, during the Lagos Island crisis, two innocent people were killed and properties damaged as a result of the turmoil caused by the warring factions.

” Our duties are to protect life and properties. When these incidents are ongoing, we did our underground research. In the course of our investigations, we discovered that NURTW Lagos Island branch is the one fighting.

“The crisis was caused by the National Union of Road Transport Workers, Lagos Island branch, and investigation revealed further is between the strong leaders in that area. It is believed that Unionism should guided by the rule of law and regulations. That is why we were able to invite State of the Union, ” the Commissioner said.

At the event the Chairman of the Lagos State National Union of Road Transport Workers and the executive were on ground and they have promised that they are going to call their members to order.

On the part of the Chairman, Lagos State National Union of Road Transport Workers, Musiliu Akinsanya said that, he reported the actions of the factional leaders immediately he realised they were attempting to destroy his administration.

“I reported them when they are trying to destroy my Chairmanship .
It’s the Lagos Island two leaders’ boys that are fighting for supremacy .
The boys are fighting themselves.
The Lagos State government does not want miscreants hiding under the leadership of NURTW.”

He declared that it is the two leaders who are causing trouble.

“Lagos State does not like to see you with dangerous weapon or allowed yourself to be used as political thugs.
When I had about the fracas I took a step by visiting the scene of the crime and I summoned both parties for interrogation and made both parties to write undertaken.

“As the fracas is going, I was also summoned by the authority. But when I invited the two factions that ,what is their problems on this Island ,Azeez Adekunle was the first person to collect the Microphone to say that people who are members of the National Union, under Mustapha Adekunle popularly known as Sego are the ones fighting.

“I took a step further by inviting them to Lagos State Police Command ,because I see it as the next thing to do.
After inviting them, I noticed that some of these people are not Union Member ,and they came with them.
I asked Kunle Poly on how to solve the fracas within them.”

He replied ,”that people on the Island are all here and they pointed themselves and with immediate effect I handed them over to Area ‘G’ Command Ogba ,which is close by ,and we were all summoned.”

From there, the leaders where mandated to produce the persons causing trouble on the Island. Thereafter, they team up with some Police Officers and get them all arrested.

When they brought them before the Lagos State Commissioner of Police CP, Hakeem Olusegun Odumosu, he knew those behind the crisis from his independent investigation, he had seen people making this trouble on the Island.

He stated that is desire is to get true members of the Union release.

“My own is that they should release my men, since their investigations had proved that my boys are not the one causing trouble on the Island.
Once they release them I will still take them to the State Council to write undertaken, that fracas will no longer occurred on Lagos Island, and if it should happen again ,I will personally hand them over to the Police, in fact I will not spare anyone.

“We came for peace, and I believe the CP had done the right thing by inviting the whole members to State Command headquarters.
Even before I became the State Chairman I was doing my best in the area of Community Policing, we are all Lagosians, and I believe if anything happened everybody knows who will suffer it.
We have earlier informed the Police ,that there are some people who are not Union members, but are hiding under National Union.

MC during the event noted he is ready to collaborate with the police to ensure there is lasting peace in Lagos State.

“I’m using this medium to tell the CP that I’m ready to cooperate with him because I don’t want anything to damage my tenure, because what I want is peace.
Even the Executive Governor of Lagos State Babajide Olusola Sanwoolu, had earlier said ,that he wants peace, and I want peace to reign in my terrain.”