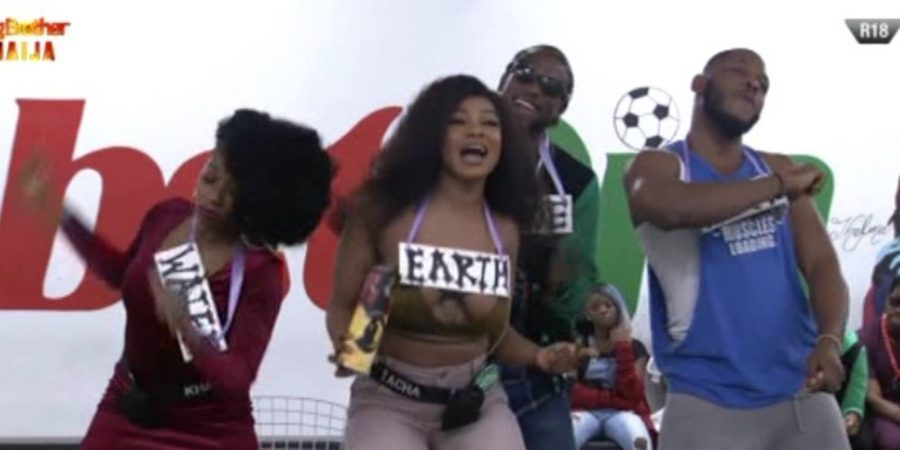 .Team Legends has won the Wager Task presentation for this week and now one point ahead of team Enigma.

Coming at a time some of the Housemates are already bargaining for Bet9ja Coins, tonight’s Wager Task was fiercely contested. From a hilarious drama presentation to an interesting monologue, the Pepper Dem Gang pulled this off really well.

With their presentation centering on the four elements of nature, the Housemates gave us a mini-drama that left us gasping for more.

Using a journey of a boy into self-discovery as their plot, the team pulled off a presentation filled with lessons to learn. Though they got carried away and finished in 26 minutes instead of the allotted 20 minutes, it was indeed entertaining.

For this team, it was comedy galore.

Mimicking the certain Housemates and reliving some past event in the House, Omashola, Khafi, Mercy and Frodd cracked our ribs so much we nearly gasped for breath. From Frodd’s mimic of Mike, to Khafi’s acting as Mercy and Omashola’s Ike act, team Legends lit up the stage tonight so much that even their fellow Housemates couldn’t stop laughing. They completed their own Task in 21 minutes.

Based on the criteria of creativity, message, inclusiveness and professionalism, team Enigma got 10 points while team Legends scored 11. With just one point ahead, team Legends were declared the winner of the challenge.

The Twist
Previously, each member of the winning team always went away with 20 Bet9ja Coins. But this time Biggie was generous as 50 Bet9ja Coins were given to each member of team Legends. But no, the Coins won’t come from Biggie this time. It has to be financed by the losing team, Enigma.