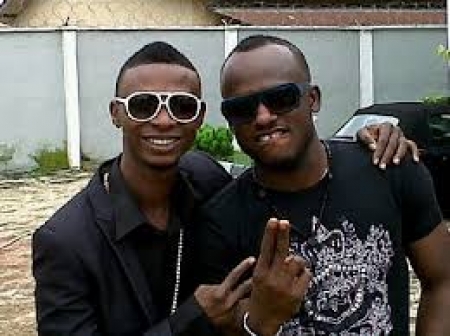 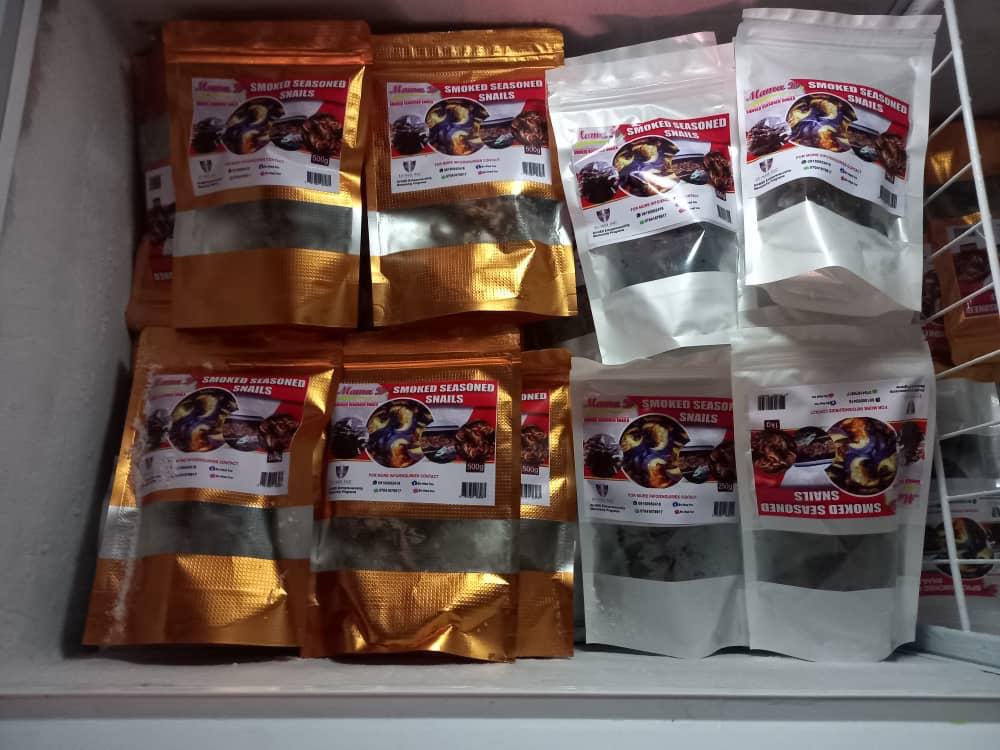 Upcoming comedian I Go save is about to be involved in a legal tussle with erstwhile friend if he cannot pay the sum of #500million to Biletiri Tunde within seven days.

Information available to us is that I Go Dye, I Go save and Biletiri have been friends for over a decade and he has been helping both of them with their publicity.

Trouble started when Biletiri was to organised some shows in November and December 2019 and he got investors who bought into the idea and was also involved in producing a publication in Bayelsa. Due to his commitment our source informed us that the young entrepreneur was offered a huge project and all of a sudden envy, jealousy became the order of the day.

I go dye then petition Biletiri alleging that he sent assassins to kill him and also used his name to defraud people of millions of naira and the young man was detained for 6 months and his pregnant woman had to even give birth in his absence.

We learnt I Go dye even sent a fellow comedian Akas Baba to go and meet him at the station to plead with biletiri to delete what he posted on Instagram which he refused but the stuffs were later deleted by some over zealous officers.

I go dye who was also to perform at the show and already confirmed to have been paid #2.5million, ganged up against Biletiri and all of a sudden I Go Save and Alladams went behind Pikolo and started organising shows with Pikolo chairman and Biletiri was languishing in detention with no help from his friends apart from Pikolo who was Biletiri partner.

Biletiri was in detention and was never allowed to organise the said events nor execute the project in the oil rich state.

On getting out of detention, a lot of people defamed his name, business partners started avoiding him and I go save was also propagating lies. Biletiri been an emotional person wanted I go dye, I go save to apologise to him when he made a post on Instagram about the incident, instead both of them blocked him on Instagram and Facebook. Now his family and some reputable foreign Ngo have taken over the matter and they want to pursue it to a logical conclusion.

sometime in September, 2019 during a telephone interview with one Publisher I Go Save defamed him with the following statement:

This statement of your which is untrue/false and which has been listen to by the general public especially our Client’s business partners, friends, colleagues and family member does not only injure our Client in the estimation and assessment of ordinary and right thinking members of the society in general, it has also in particular caused our Client to be regarded with feelings of hatred, contempt, ridicule, disdain, disesteem and as a criminal amongst members of the general public especially his friends, colleagues, business partners and family members.

We were further informed by our Client that he has never defrauded Mr. Joseph Osawaru, other business men or show promoters or anyone else in his life.

It is further pertinent to state that our Client who has a reputation to maintain, is a law abiding citizen of our beloved Country – Nigeria and has over the years built his admirable reputation as a graduate of Mass Communication from the prestigious Yaba College of Technology, Lagos State and in his business by sheer determination, hard-work and in strict compliance with the rule of law.

We therefore consider your above quoted Statement as been detrimental to our Client’s reputation which is not based on the good opinion which he has of himself but the estimation in which others hold of him and in fact, the publication has caused serious damage to his social, business and family life.

We have the authority of our Client to demand and we hereby strongly demand as follows:

1. The immediate retraction of the above quoted publication as it affects our Client on the same platform with which it was published, five national dailies and the tendering of an unreserved apology to our Client through a letter addressed to him to be personally written by you through our office. 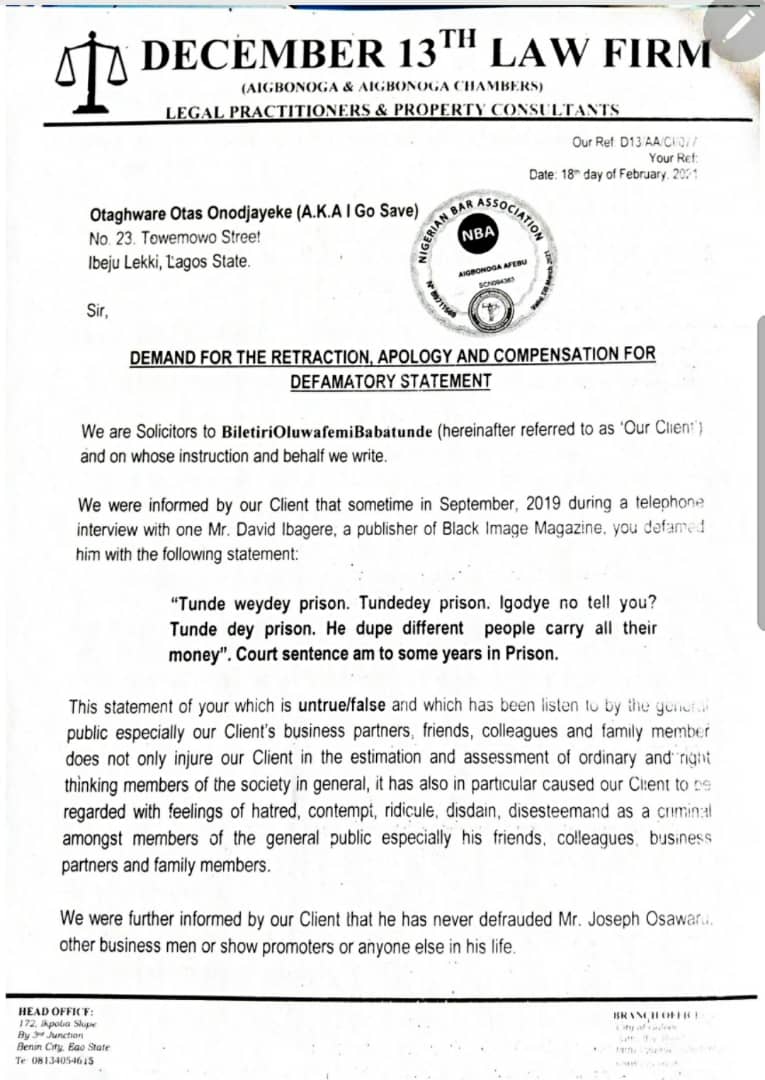 2. Payment of N500, 000, 000.00 (Five hundred Million Naira) only as compensation for the damages caused to our Client’s reputation already by the said publication. 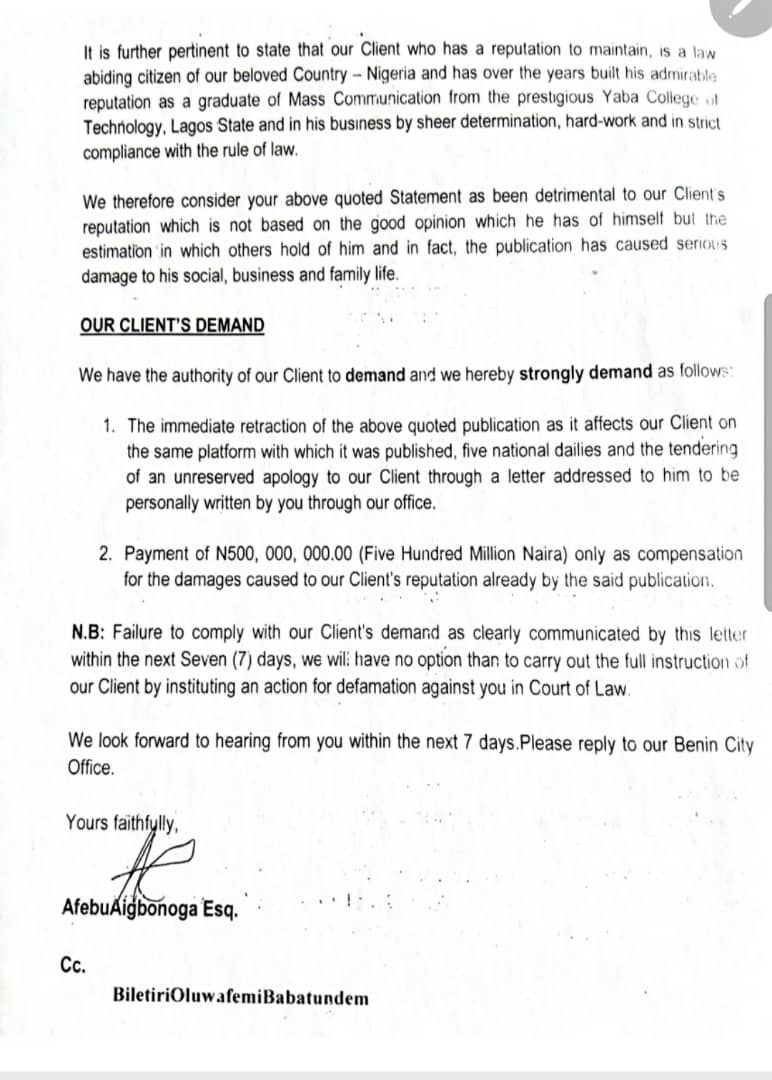 N.B: Failure to comply with our Client’s demand as clearly communicated by this letter within the next Seven (7) days, we will have no option than to carry out the full instruction of our Client by instituting an action for defamation against you in Court of Law.