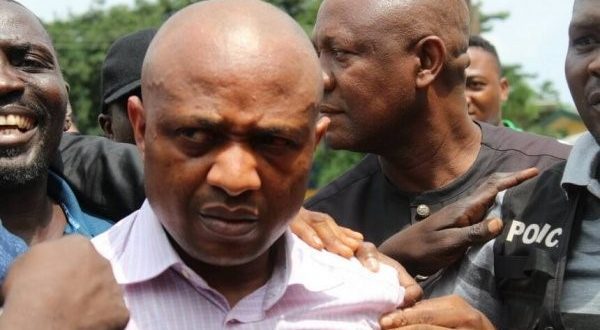 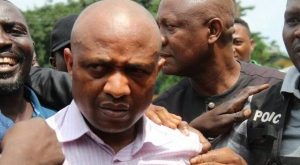 The trial of suspected kidnap kingpin, Chukwudumeme Onwuamadike, alias Evans, and his co-defendants, will on September 13, 2018, resume before Justice Adedayo Akintoye of the Lagos State High Court in Igbosere.

The trial, which last held on June 26, 2018, had been put on hold as a result of the annual vacation of judges.

Judges of the Lagos State High Court proceeded on their annual vacation on July 16. They are scheduled to resume on Tuesday, September 11.

Evans’ trial is expected to resume on Thursday, September 13 before Justice Akintoye.

He is facing two separate charges bordering on conspiracy to kidnap, kidnapping and attempted murder.

On June 26 when the case was last heard, the court dismissed applications by the defendants, seeking to quash the charges on the contention that the two charges before Justice Akintoye were duplications of earlier charges filed against Evans and others before Justices Hakeem Oshodi and Oluwatoyin Taiwo of the Lagos State High Court.

In the applications filed in May, Evans’ original lawyer, Mr Olukoya Ogungbeje, who later withdrew his services, had contended that the two charges before Justice Akintoye were “grossly defective, repetitive and amounted to an abuse of court processes” because Evans had earlier been charged before Justices Oshodi and Taiwo.

But the Lagos State Director of Public Prosecutions, Ms Titilayo Shitta-Bey, maintained that the charges were not an abuse of court processes because the different charges contained different victims allegedly kidnapped or murdered by the defendants.

She then adjourned till September 13, after court’s vacation, for continuation of trial.

In the first charge before Justice Akintoye, Evans is standing trial alongside Joseph Emeka, Ugochukwu Nwachukwu and Victor Aduba.

In the second charge, he is standing trial alongside Joseph Emeka, Linus Okpara and Victor Aduba.

In one of the two charges before Justice Taiwo, the Lagos State Directorate of Public Prosecutions accused Evans and three others of killing two persons in their failed attempt to kidnap the Chairman of Young Shall Grow Motors, Obianodo Vincent.

The criminal operation was said to have been carried out by the defendants around 11pm on August 27, 2013 on Third Avenue, FESTAC Town, Lagos.

Those charged along with Evans were Joseph Emeka, Chiemeka Arinze and Udeme Upong.

The seven counts against them border on attempted murder, murder, kidnapping and illegal firearms deal.

In the second charge, Evans, one Victor Aduba and four others still at large, were accused of conspiring among themselves to kidnap one Sylvanus Hafia around 5.30pm on June 23, 2014 at Kara Street, Amuwo Odofin, Lagos.

The prosecution alleged that they captured and detained Hafia and demanded a $2m ransom from his family.

The six were arraigned on August 30, 2017, on two counts of conspiracy and kidnapping of the Chief Executive Officer of Maydon Pharmaceutical Limited, Donatus Dunu, from whose family they allegedly collected €223,000 (N100m) as ransom.

Evans and his co-defendants have pleaded not guilty to all the charges.

They have been in custody since August 30, 2017, when they were first arraigned.