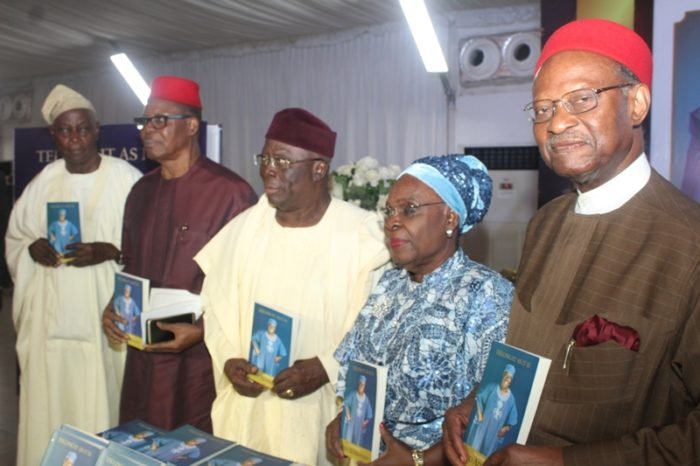 Adebanjo, in his autobiography, “Telling It As It Is,” unveiled in Lagos, Southwest Nigeria on Tuesday, stated emphatically that a group of people led primarily by Ige and former President, Chief Olusegun Obasanjo, were undertakers who presided over the funeral of AD, after they had plotted and supervised its sickness and death.

As far as I am concerned, the moment Bola Ige joined Obasanjo’s government, following his loss of AD’s presidential primaries where he polled six votes against Chief Olu Falae’s 17, marked the beginning of the end for the party. In my opinion, these are the scenarios which led to the collapse of AD.

“Bola Ige didn’t join us in Action Group until 1961. We met for the first time when I was living in England. He was also a student there at that time. Nobody was against Bola Ige’s candidacy in the presidential primaries of the Alliance for Democracy in 1999. Awolowo was no longer there to contest election as presidential candidate. Somebody must lead. I was neutral in the primaries, though I had my views.

“Bola Ige could be rightly accused of undermining Afenifere and plotting the eventual collapse of the AD. Ige’s excuse that he was betrayed at the party primaries was not tenable. After all, he was among the people who selected those who conducted the primaries, to the extent that when we nominated Lawrence Omole, Ige objected to his nomination and we dropped him,” he said in his book.

According to Adebanjo, it would not be fair, as alleged by Bola Ige, to blame elders of the party for his loss in the primaries of the Alliance for Democracy, explaining that in the first instance, he took part in nominating the body that constituted the Electoral College.

“I had said it when he was still alive. Even at the meeting of the party leaders which tok place in my office in Lagos, Pa Solanke Onasanya was opposed to his presence there. He said ‘since you are one of the candidates to be interviewed, you have no right to be here.’ But he insisted that as deputy leader, he must be there. I think it was Tinubu who said that even in a company meeting when a person was interested in an issue, he would excuse himself. When he insisted, Pa Adesanya ruled in his favour that he could sit down and be part of the proceedings, so we started the nomination,” he explained.

Adebanjo added that after the election, Ige told some people, including Ambassador Oladapo Fafowora that the primary was going to be a walkover for him.

“Fafowora told me that Ige had boasted that it was going to be a walkover for him at the primaries. He had a right to think so, because about six of the 23 members of that committee were his former commissioners. There were Chief Emmanuel Alayande, Chief Bisi Akande, Justice Adewale Thompson, Lam Adesina and Senator Akinfenwa. But he had a handicap. We had chosen governors of states as members of the electoral body. Neither Pa Abraham Adesanya, Sir Olaniwun Ajayi nor myself was a member of that body; we inaugurated the body and left. Segun Osoba was a member too,” he explained further.

Adebanjo continued: “I don’t think I remember who said I told him not to vote for Ige. He was so sure of winning that he told Fafowora. When this was published in an interview I had with the press, Fafowora felt so embarrassed because they are both Ijesa. But unknown to Ige, unfortunately, many of those he thought would vote for him had grudges against him which they kept to themselves waiting for an opportunity to vent their spleen on him.”

“We didn’t want to open an account for AD because of  our experience in AG. The same happened in UPN. Because if anything happened, the account of the party would be frozen. There were some things we knew that Ige never knew. One of the things I knew, for instance, was that he was relying on some people who would never vote for him. One of them confided in me. Bola had offended some people who kept quiet. He really thought he would win.

“The problem with late Bola Ige was that he didn’t really know his friends from his enemies. As I told him at a meeting where they wanted to settle the matter, where he was to be appointed a minister and we opposed to it, he made allegations against some leaders of the party. He even said he didn’t know what he had done to me that I was opposed to him. Then I told him ‘I always tell you the truth; something others would not tell you.’

“So when the result came out, he was baffled. He was devastated, having thought he could boast that his victory at the party primaries was achieved when he was not even in the country. He told somebody that he was sure of 13 out of the 23 votes. I said at an interview later that when his 13 became 9, he should have examined himself. Unfortunately, some intelligent people, close friends and party associates of Bola Ige insinuated that we were culpable for his death. How they reasoned, I don’t know. These people could have wondered at the mysterious murder of the nation’s chief law officer despite the heavy presence of security personnel around him, thus, foreclosed investigation into other areas because of their prejudiced minds.”

According to Adebanjo, “we were opposed to Ige joining Obasanjo’s cabinet. But he accepted the appointment to spite us; obvious of the fact that Obasanjo was not inviting him in good faith. This was because of  previous scurrilous criticism he (Ige) had leveled against Obasanjo which the latter had not forgotten.”

The elder statesman said he believed that with the soaring popularity of AD, if Ige had not joined Obasanjo’s cabinet at that time, he did not think that government would have lasted six months.

“Again, how can you go to the cabinet of a person who disparaged our leader in a book by saying that all he (Awo) was looking for he got on a platter of gold? How can you leave your party and go and join somebody you know does not have a good word either for our party or our leader in his lifetime and after?

“Obasanjo deliberately chose Bola Ige in order to destroy AD. It was not because he loved him. But Bola Ige should have known that. He thought he alone was Afenifere. He had forgotten that all of us make up Afenifere. A tree does not make a forest. Even Chief Awolowo never claimed to be an oracle or superior to Afenifere and Action Group or Unity Party of Nigeria. If it was not ambition, Bola Ige would not have joined Obasanjo’s government. He knew what Obasanjo stood for. It was ambition that blinded him,” he said.