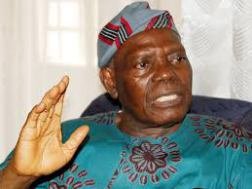 A Chieftain of the ruling All Progressives Congress (APC), Chief Bisi Akande, has reacted to former President Olusegun Obasanjo’s letter to President Muhammadu Buhari, warning the President against re-contesting for the 2019 general elections.

In an exclusive interview with Sun newspaper, Chief Akande blasted the former President, saying “Obasanjo does not understand any politics beyond himself. Obasanjo’s politics is Obasanjo. The only thing Obasanjo understands best is Obasanjo.”

“So, Obasanjo’s politics is Obasanjo and whatever he writes or says about anybody doesn’t carry weight, particularly among us his people, because we knew him for a long time,” Akande added.

When asked if he is satisfied with the style of President Buhari’s led government, the former interim Chairman of the party said: “I am impressed by his style of leadership but his enemies are unhappy.”

He added that President Buhari’s enemies are some set of people who do  not want him remain in the position and are setting trap for him everywhere.

His words: “General Theophilus Danjuma just told us that the military are the ones killing people. We have read about some military officers who kept money in a septic tank and we have also read about the military that stole billions of dollars and naira from Nigeria’s treasury. Now, if President Buhari came and stopped this stealing, you won’t be surprised if the military are behind these killings in order to make Buhari unpopular and throw him out of office.”

Bola Ige Presided Over The Funeral Of AD – Adebanjo