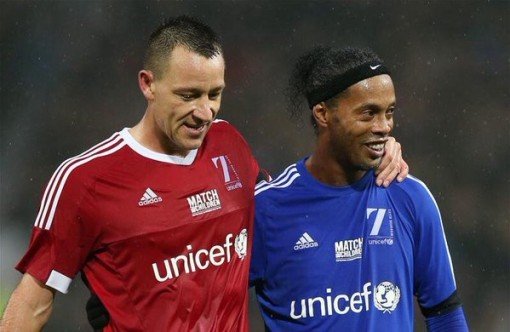 Former Brazil and FC Barcelona midfielder Ronaldinho, who won the World Cup, Champions League, Copa Libertadores and World Player of the Year award, is retiring from the game.

His brother and agent Assis made the announcement on Tuesday.

Ronaldinho, who will be 38 in March, has not played a competitive match since 2015 bt he had also avoided calling a definitive halt to his career until now.

“He’s stopped. It’s over,” Assis said. “We are going to do something pretty big, something cool, after the World Cup in Russia, probably in August.”

The events, most likely farewell matches, will take place in Brazil, Europe and Asia, and could include a match with the national team, Assis said.

Ronaldinho began his career at Gremio and played for seven other clubs, including Paris Saint-Germain, AC Milan, Queretaro and Brazilian sides Flamengo, Atletico Mineiro and Fluminense.

But it was at FC Barcelona between 2003 and 2008 where he spent his glory years.

He turned in some of the greatest performances ever seen by the storied Spanish club, perhaps most memorably in a 3-0 win over Real Madrid at the Bernabeu in 2005.

Ronaldinho left for Milan in 2008 and won the scudetto there in 2011, before heading back to Brazil and taking Atletico Mineiro to their first Copa Libertadores title in 2013.

He never again reached the heights he scaled at Barca for prolonged periods.

However, he remained a captivating presence, known for his no-look passes, superb free kicks and free-wheeling style that typified the way Brazilians play the game.

He played 101 times for Brazil, scoring 35 goals including a 40-yard free kick which knocked England out the 2002 World Cup

HOW MUSLIM CLERIC WAS ARRESTED WITH HUMAN PARTS IN LAGOS