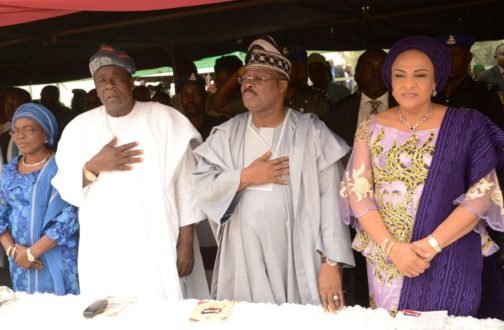 Governor Abiola Ajimobi of Oyo State says the era of mass promotion in the state civil service, which encourages ‘indolence and inefficiency’ is over.

Henceforth, he said that promotion in the state civil service would be based on competence, hard work, efficiency and a service-oriented public service.

The governor spoke at the 2018 edition of annual new year interfaith service, held at the Governor’s Office Car Park, Ibadan, on Tuesday.

Ajimobi said: “As we have started doing, high fliers and those who make a meaningful and significant contribution to the development of Oyo State will be identified and adequately rewarded.

”By so doing, we will unlock the potential within the system. In this wise, the present appraisal system in the public service will be reviewed. Some innovations will be introduced to make an assessment of the performance of workers more objective and quantifiable. We have jettisoned mass promotion, which encourages indolence and inefficiency. Henceforth, only those who deserve to be promoted, and have been found worthy in efficiency and competence, will be promoted.”

At the event, awards and cash rewards were given to different categories of civil servants who distinguished themselves in their various ministries, departments and agencies in 2017.

The outgoing Head of Service, Mr. Soji Eniade, who the governor described in superlative adjectives, was also offered a political appointment as an Executive Assistant to the governor, for what he called his exceptional performance, intelligence, diligence and efficiency.

The governor, who is known to have positively influenced the dress sense of the civil servants, also announced a donation of N250, 000 to a civil servant who he adjudged as the best dressed at the occasion.

Ajimobi also said that with effect from January 2018 civil servants in the state would be made to participate in the recently-launched state health insurance scheme, which attracts free medical service on payment of N650 per month.

He advised the workers to see themselves as part of the government in its quest for repositioning the state and to remain committed to their jobs, as partners to his administration.

“In my interaction with civil servants, I discovered many of them with latent potentials, while a good number of them are also intellectually sound. I have, therefore, decided to harness this potential to bring out the very best from our civil servants. But I want to advise you that in the discharge of your duties, you must have eyes for perfection. I want to leave behind better, well motivated and efficient civil servants who can match their counterparts anywhere in Nigeria,” Ajimobi said.

Having successfully defrayed the mounting salary arrears, with only December salary still outstanding, Ajimobi promised that within the next three months, his administration would do everything possible to ensure that salaries and pensions were thereafter paid promptly.

After achieving peace and security, the governor said that the next policy direction of his administration would be anchored on five pillars of technology-driven education, industrialisation, health, integrated agriculture as well as entertainment and tourism.

He said, “These are indices of sustainable development, which is the pathway to the future. This is what we want for Oyo State. We want to make the state a hub of industrialization and we have started pursuing that goal with the creation of free trade zone and an industrial park”.

In his address, the outgoing HOS appreciated the Ajimobi’s administration for raising the bar of good governance by inculcating some vital ingredients of the private sector into the public sector of the state.

He said: “I charge you all not to engage in any act or activity that is detrimental or inimical to the aims and aspirations of the state government. The structure of a modern state, being systematically and strategically built by the present administration must not be destroyed. You are therefore admonished to be more dedicated, more devoted and more professional in your activities and assignments. Let us keep raising the bar of good governance”.

Having put in 35 years in the civil service, with five years as permanent secretary and more than three years as HOS, he said that he had been well groomed and was better equipped for higher responsibilities in the future.

INDIGENOUS SHIPOWNERS MAY GET NNPC, NIMASA NOD TO LIFT CRUDE