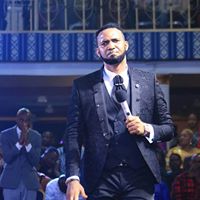 Sequel to the forthcoming governorship election in Kogi and Bayelsa state, on the 16, November 2019,, the Senior Pastor of Grace Nation International a.k.a Liberation city ,Dr. Chris Okafor has declared a virdict on the outcome of the governorship elections in both state, he said God showed him, that lots of people were crying against Governor Yahaya Bello of Kogi state, first tenure, he said PDP will win the election but before the announcement of the results, things will change and Governor Yahaya Bello will be announced winner.

On the Bayelsa election same November 16, 2019, the man of God said he saw the flag of APC sinking while there are jubilations of victory with PDP flags.
The Oracle of God also remarked that these prophecy is not target at pulling anybody down but to keep everyone abreast of his or her responsibility towards there aims and objective in political office, he said with prayers, dedication to visions, these prophesy can be in favour of whom is ready to listen to instructions, because instruction brings results,

Meanwhile the Senior Pastor of Grace Nations worldwide Dr. Chris Okafor also made a remark in parable at his midweek service on Wednesday 23 October that , he saw Anthony Joshua re-collecting all his belts from cruiz during their rematch fight coming up in December 2019 in Saudi Arabia
It will be recalled that Dr. Chris Okafor is among the prominent men of God across the globe that has remained steadfast in the vineyard of God with accurate prophecy on all the political event in the country, the last one he gave was the coming on board of Governor Sanwo Olu of Lagos State before the general election in March 2019.