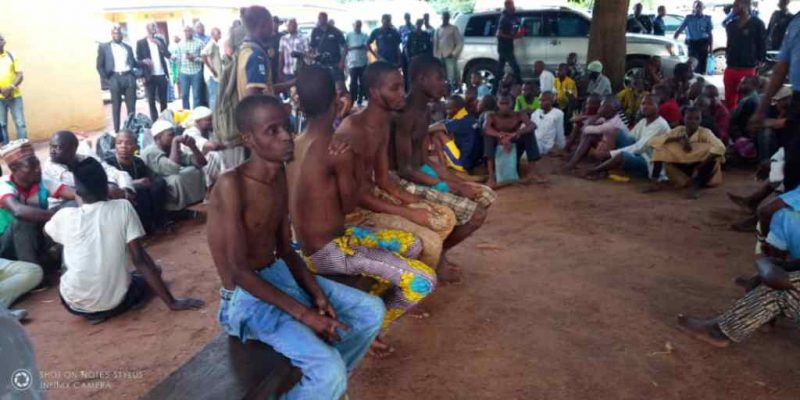 Victims of rehab centre in Kwara busted by the police[/caption]

A woman rescued, among 107 others, by the police in Kwara state from yet another horrible rehabilitation centre has spoken about how she was raped daily by the uncle of the operator of the centre.

Olaide Arikewuyo said she had spent five years in the centre and alleged that she had been sexually abused by the uncle of the owner of the facility.

“I am living with the owner of the centre in their apartment and the uncle used to have carnal knowledge of me every night.

” Since I have nobody to turn to and it is not easy to escape from there, I have been abused by five men. In the process, I got impregnated and had three abortions. I just thank God that the police came to my rescue,” she said.

The State Commissioner of Police, Mr Kayode Egbetokun said the command acted on an intelligence surveillance and raided the centre where 103 males and five females were discovered unlawfully detained in the centre.

“Some of the victims were observed to be have some forms of infections and diseases and were not treated while some others were mentally ill.

“Some of them during interview claim they were brought to the centre by their parents,” said the CP.

He said investigation was ongoing and that the police command would take care of the victims until their parents come to fetch them.

One of the victims, Waliyu Ali, said his parents brought him there because he was addicted to Indian Hemp.

He added that his parents believed that the place was a rehabilitation centre and that he would stop smoking Indian Hemp after spending some months there.

Another victim, Abdulazeez Korede, said “my parents brought me there because I am a drug addict and they want to stop me from taking hard drug.

“But to my surprise I was chained and beaten up mercilessly and taken under ground where other guys like me were kept when my parents left.

” I was kept in a dungeon for four months where there was no sunlight or window and no proper food.”

Another inmate, Tope Owonifari, said he was taken there because he was troublesome and used to smoke cigarette.

He added that despite the founder collecting N15,000 monthly food allowance from his parents, “I was not given proper meal”.

“The owner of the centre charged my parents N200, 000 for the treatment and I have spent four days here which is like four years to me,” he added.

Owonifari commended the Kwara police command for rescuing them.

A similar camp, Mallam Niga Rehabilitation Centre, in Rigasa Kaduna state was recently busted by the police, with 147 detainees rescued.

President Muhammadu Buhari on Oct. 19 directed the police to uncover all illegal detention (rehabilitation) centres and rescue those held there.

Breaking! Gov, yahaya bello might Lose election, if he fails to listen to instructions, –APC is sinking in Bayelsa as PDP flag dominates -I see Anthony Joshua taking back his belts from cruiz, Dr. Chris Okafor Predicts