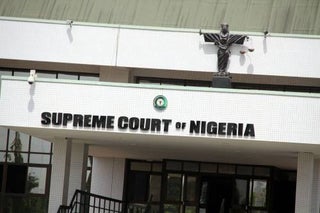 The Supreme court on Friday dethroned a first-class monarch in Oyo State, the Eleruwa of Eruwa, Oba Samuel Adegbola.

It would be recalled that Adegbola had in 2013 lost a 15-year battle to retain his throne at the Court of Appeal sitting in Ibadan.

The monarch and six others brought a suit against Mr James Olatunde Idowu and four others following a judgment delivered by Justice Ladipo Abimbola of the State High Court on January 26, 2011, that the current Eleruwa was wrongly picked for the throne.

Justice Monica B. Dongban-Mensan, in 50-minute judgment, thanked the counsels, Demilade Olaniyan and Tona Akande, for their industry, and dismissed the appeal of the appellant.

Justice Dongban-Mensan, who examined some issues raised by the appellant, said the eminent jury were satisfied with the process in which the earlier court conducted the case. It thereby complied with the court process and affirmed the judgment of the High Court.

Oba Adegbola became the Eleruwa in 1998, following the death of his predecessor, Oba Bolanle Olaniyan in 1994.

His removal by an Oyo State High Court on the grounds that his selection, nomination and approval by the State Government were irregular, null and void, was affirmed by the Federal High Court.

Adegbola had dismissed the appeal court judgment by saying that, “There is no cause for alarm as my counsel are finalising the process of appeal at the Supreme Court.”

He said the case being a civil matter can still be taken up to Supreme Court, adding that he is ready to enforce to the fullest, his rights under the provision of law.

His opponent, Rasheed Oyedepo said the victory of the over-a-decade legal battle has confirmed that the judiciary remains the hope of the common man.

“Today, the entire Eruwa community is set free as a result of the judiciary, which restored our hope. We stood by the truth for the 15 years that Adegbola was illegally picked by some cabals in Eruwa, but today, God has revealed himself.

“I urge Oyo State Government to ensure the implementation of the court order,” Oyedepo said.

Fresh Graduates died in accident on their way to orientation camp