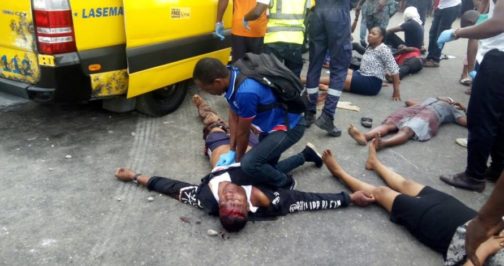 A tragic incident occurred yesterday November 28 along Kano road as some graduates of the Federal Polytechnic Offa, Kwara State died in a horrific car accident.

The fresh graduates were reportedly on their way to participate in the National Youth Service Corps orientation exercise when the sad incident occurred. Some victims of the accident have been confirmed dead while others are critically injured.
According to the school blog kwaraployblog.com, the auto crash claimed about 16 lives and just a few were seriously injured.

Facebook user Baiyeri Oluwafemi who shared a photo from the accident scene wrote;

Graduands of Offa Poly posted to Kano for NYSC involved in an accident. Some in Coma, some dead. May those dead rest in peace and may God grant those in coma a speedy recovery