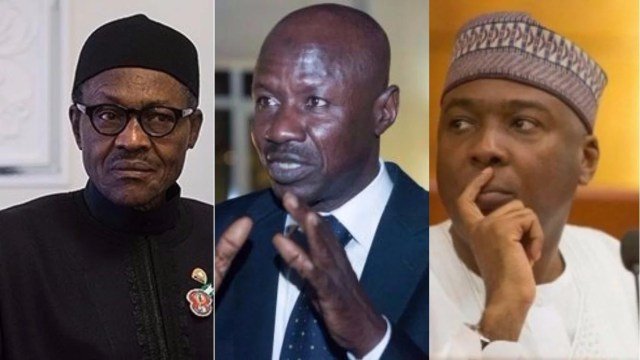 This, he said, was the reason why Buhari represented him for screening the second time after the Senate rejected his nomination.

According to him, the President has given Magu free hand to carry out the assignment.

The Senate has continued to demand Magu’s removal from the EFCC.

Osinbajo, in a media interview granted to reporters in Lagos , spoke on the  Department State Services (DSS) disagreement with the National Intelligence Agency (NIA) in the past and Buhari’s recommendation of Magu despite DSS’s opposition.

According to the interview released by his Senior Special Assistant on Media and Publicity, Laolu Akande, Osinbajo while reacting to claim that the disagreement was causing discord in the administration, said: “That’s not true. Let me put it this way; first let’s take the Magu example. One of the things that the President decided to do is to ensure that every agency does its work without direct interference from the President.

“So, the President does not call the EFCC, and say, “Go and arrest Mr. Ekpeyong”, no. And that’s one of the most important things about the style of this government, and we want the agencies to do their work. No one has showed up and called Magu and say, “Look go and arrest.

“While you will find, for example, that the Director General, DSS, upon the request by the Senate, wrote a security report and sent it, yet it is up to the President to decide whether he’s going to present this candidate. Interfering with the process of a security report is not leadership; that’s obstructing.

“He is not supposed to interfere. If you say, ‘send your report’, whatever report you want to send, the man defends himself, and we still believe he is the right person for the job. That is the position that we took when he was presented the second time.

“Of course, the Senate has had their own say on that and they are entitled to take some of the positions they are taking. But the President believes that this is the right man for the job, so he presented him the second time.

On the arrest of DG, NIA by the EFCC, he said: “With respect to the arrest of DG, NIA, and some of what took place, I think the fair thing to say is that the President has said that the EFCC has the absolute right to go ahead and do whatever it needs to do to ensure that anybody who has committed a crime or who is suspected to having committed a crime, is brought to justice; and that’s the position that the EFCC has taken.

“You know the EFCC has issued a notice for the DG, NIA, and SGF to attend interview with the EFCC; but we are sure that that process would be followed to a logical conclusion.

“To ensure that you allow government agency do their business, that’s very important; that’s institution building.  Look at what is happening in the United States (U.S.) today; the President is sometimes angry with the Federal Bureau of Investigation (FBI) because the FBI is doing its independent work, and that’s what we hope to achieve.”

On the state of primary healthcare in the country, the vice president said the Federal government was worried because the health system had suffered for long.

He said: “We have been focusing on getting the diaspora to work with us to improve our health system. We are also looking at how healthcare insurance can improve it. I agree that if all of us put our resources and our time in local medical care, we will improve it.”

He added that there are constant meetings to ensure the development and continued peaceful atmosphere in the Niger Delta region.

Osinbajo acknowledged that the government has been recording successes in the Ease of Doing Business reform, visa reforms and measures to attract more foreigners to boost the Nigerian economy.

He also explained that the President has always been committed to the South East and has not only made budgetary provisions for the second Niger Bridge but also gave people from the South East good positions in his cabinet.

On the areas the Federal Government could have done better, Osinbajo said: “Let me say that one of the very important things for me, I think we could have done far more in terms of jobs, direct jobs now, because we’ve done enough. We first created jobs in agriculture. Perhaps we are hoping we would be able to provide by now 500,000 of our N-power jobs, but because of the income we are able to provide 200,000. We have another 300,000 waiting to be employed.”

“So maybe a year into our government, we could have done 500,000. So for me, I think if we have the kind of resources that people had 10 years ago when oil was $115 per barrel, we could have provided far in excess.

“I also think that, perhaps in the area of power, especially trying to do much more, but power is privatised. A lot of the power companies, a lot of the GENCOs, the DISCOs in particular, simply don’t have the resources to replace assets, so they slow down.  How I wish they have more funds to pump into assets and we hope they have more resources to do so. We’ve put in place the over N700 billion payment assurance scheme; but that is insufficient.”