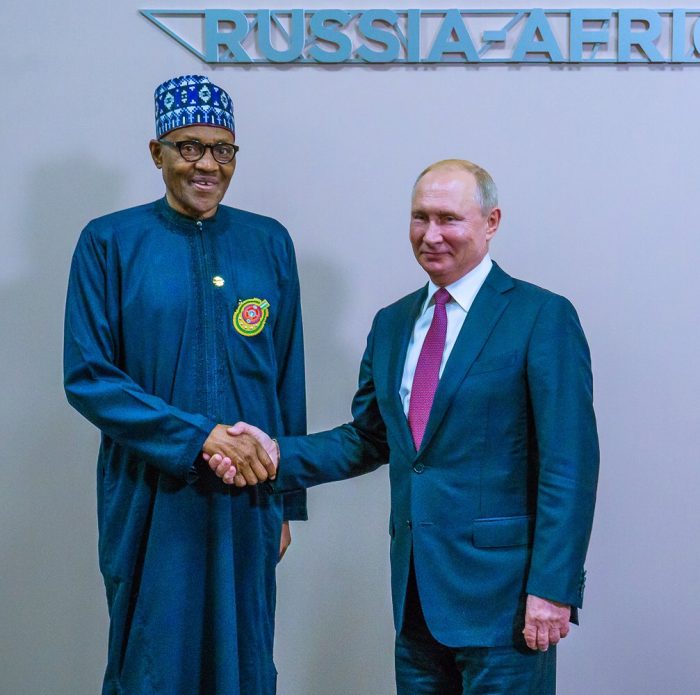 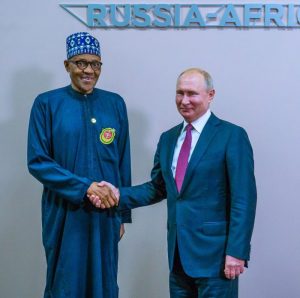 Buhari (left) with Russia’s Putin: Buhari got everything he wanted from Russia

President Muhammadu Buhari has returned to Nigeria from his four-day visit to the Russian Republic extremely happy with the success of the visit, which outcome is the best response to a few skeptical audiences back home, including a toxic newspaper editorial, “Buhari, Stay On Your Job,” by the Lagos-based Punch Newspaper asking him to not travel.

Based upon the results, it must be concluded that the President’s mission was fully accomplished. The definite high point was the decision by the Russians to agree to a government-to-government understanding that would see them return to complete the Ajaokuta Steel Rolling Mill and commission it. Nigeria had expended well over USD 5 billion without it coming to fruition.

When he campaigned early in the year for his re-election, which he won with a majority of four million votes, marking a difference of 14 per cent against his closest rival, President Buhari reiterated an earlier promise to complete Ajaokuta to provide jobs and the steel backbone that the nation’s industrial complex needed so desperately. Could this have been achieved if he had locked himself inside the Aso Rock Villa? The answer is obviously a “no.”

Yet, this was not all that he secured.

Presidents Buhari and Vladimir Putin opened a “new chapter” in the historically important relationship between the two countries as they both agreed to expand cooperation in energy sector, petroleum and gas, trade and investment, defence and security, mining and steel development, aluminium and phosphate, education and agriculture and a plethora of other issues which, to my pleasure had been spelled out in an elaborate manner by Tonye Princewill, an astute leader in the All Progressives Congress, APC in an opinion article he widely circulated.

President Putin noted that the traditional friendly relationship between Nigeria and his country has gained a new momentum, symbolized by a 93 per cent growth in trade between the two nations in 2018, promising that “Russian companies are ready to offer their scientific and technological developments to their African partners, and share their experience of upgrading energy, transport and communications infrastructure.”

In President Buhari’s view, this summit was a necessary anchor “to kick start what has been a very cordial and mutually beneficial relationship in past years…there are similarities between Russia’s journey under your leadership (Putin’s) and Nigeria’s aspirations for the future. We can learn a lot from the experiences of Russia’s ongoing reforms of transitioning from an oil dependent economy to a modern, diversified and inclusive economy.”

Russia is clearly seeking to reconstruct the important role the country played in its Soviet era. They had traditionally supported African countries in their fights for independence and sought to build industrial infrastructure and develop national economies.

In another sense, the focus of the summit on multilateralism, the advocacy for the reform of the United Nations and climate change action is a direct response to Trump era unilateralism.

It is noteworthy that Nigeria got everything our delegation asked for. When German Chancellor, Angela Merkel visited President Buhari in Abuja in August last year, she made reference to a pertinent defect in the relationship between Europe and Africa when it comes to the promotion of projects.

It is in the light of this that one of Russia’s leading rail line service providers, MEDPROM indicated their interest in undertaking the 1,400-kilometre Lagos-Calabar rail track that will pass through all the states in the South-South sub-region.

“When we give you a project, we show you the door to a bank. We tell you to go and obtain financing. The Chinese give you the project, they give you financing. That is something we will have to look at,” she said to President Buhari.

Before the Europeans make up their minds on this, the Russians are now having a go at the idea. For every viable project Nigerian officials suggested in the course of this summit, the chances of the financing appeared within sight.

It is in the light of this that one of Russia’s leading rail line service providers, MEDPROM indicated their interest in undertaking the 1,400-kilometre Lagos-Calabar rail track that will pass through all the states in the South-South sub-region.

The agreement and MoU signed between the NNPC and the Russia’s Lukoil is another spectacular agreement along these lines. Lukoil owns seven refineries and a record turnover of USD 38 billion.

The two oil giants will upgrade their commercial relationship to a government-to-government backed partnership, to work together in upstream operations and in revamping Nigeria’s ill-functioning refineries. The signing ceremony was witnessed by Timipre Sylva, Minister of State for Petroleum Resources. The Group Managing Director of the NNPC, Mele Kyari signed for the Nigerian side while Vagit Alekperov, President, signed on behalf of Lukoil.

In support of this, President Buhari made clear that he wished to work with Russian businesses to improve the efficiency of our oil and gas sector, giving a strong assurance that his administration will “ensure this initiative is implemented within the shortest possible time.”

Of no less significance is the MoU resolving past issues, paving the way for the revival of the rested joint venture between the NNPC and Russia’s gas giants, GASPROM for the development of Nigeria’s enormous gas resources and its infrastructure.

In that waggish but poisonous editorial, the newspaper in question raised concerns about terrorism, kidnapping and general insecurity in the country. It asked a question, wondering why the President would travel abroad when there is, in the country, the problem of kidnapping and fire from oil tankers had caused the loss of life and devastation of shops. Yes, these are sad and unwelcome. This is a President who is praised for his prompt response to the Onitsha fire, first by releasing a message of commiseration same evening and thereafter, dispatching the Minister of Humanitarian Affairs on a condolence mission. The minister gave directive on the spot to the National Emergency Management Agency, NEMA for the immediate deployment of emergency assistance to the Southeast.

Either out of ignorance or mischief, the Punch failed to see how important it is for the President to seek international support in tackling home grown terrorists, the Boko Haram, reinforced by 2000 ex-ISIS fighters as disclosed by Mr. Putin.

Not only did President Buhari get that needed support to fight Boko Haram terrorists, he got the two countries to cooperate extensively in the strategic fields of defence, civil nuclear energy and in dealing with piracy and oil pipeline vandalism in the Gulf of Guinea.

The Nigerian leader also got a deal for the technological upgrade and timely delivery of the balance of seven, out of an existing order for 12 Attack Helicopters. These, and an assortment of military hardware are direly needed by Nigeria to deal with the new wave of crime bedevilling the country.

Interestingly, one of the three key themes of the whole conference is security. African states with Russia’s support have, as an outcome, drawn up a regional security architecture that would use new technological solutions to ensure security for cities, securing the borders and creating a buffer against the illegal movement of explosives, weapons, drugs and smuggling to reduce terrorist danger to the continent.

Still on security, the Nigeria-Russia Military Technical Agreement that lapsed a few years ago without being renewed will be given due attention by Nigeria. Russia had been ready with her part. President Buhari gave a response to this, saying, “I have directed the Minister of Defence to work with the Ministry of Justice to conclude this matter within the shortest possible time.”

The significance of this agreement lies in the fact that it opens the door to the procurement of military hardware, on a government-to-government basis, eliminating middlemen and reducing cost, as well as the training of military personnel, modernization of the armed forces, refurbishment and renewal of infrastructure and equipment, which President Putin said he is ready to assist Nigeria to undertake.

The one perennial business and, if you like emotional topic between the two countries is the protracted issue of the Aluminium Smelter Company of Nigeria, ALSCON, Ikot-Abasi, Akwa-Ibom State. It too, will be resolved. President Buhari announced that he had asked the Ministry of Justice, “to submit a comprehensive report on the UC Russel (the Russian owners of the plant) matter…I want to assure you that the aim of our reforms is to ensure such investments are concluded and actualized in a professional and painless manner.”

There are many of our citizens who do not reckon with the fact that this country has a nuclear programme for about 40 years, one however, that has not gone beyond the setting up of research stations. Arising from these discussions, President Putin invited President Buhari to join him in taking the next step in the implementation of the project by commencing the construction of the nuclear power plant.

The two Presidents also addressed issues in education and agriculture. Russia said she would give additional scholarships. There are currently 100 Nigerian students studying under her scholarship and so far, 797 students from Nigeria have benefited from scholarships for training in Russia in various academic fields.

On agriculture, Russia agreed to support Nigeria in laying a solid foundation for food security. This will partly come through raw materials (phosphate) supply for President Buhari’s very impactful Presidential Fertilizer Initiative that has seen the reopening of dozens of blending plants and the return to work of thousands of employees.

Russia, now the world’s largest producer of wheat according to President Putin, will work with Nigeria in growing wheat to meet domestic and market needs.

This is in response to President Buhari who made a request to Putin, that “we seek your Government’s support especially in the area of wheat production. Today, Nigeria produces less than one hundred thousand metric tons of wheat locally while our imports are projected to exceed five million tons in 2020. We therefore need your support to bridge the deficit which will create jobs and save our foreign exchange for other important areas like security, defence and infrastructure.”

The two leaders also discussed regional and international issues of mutual interest, with President Buhari pointedly asking for Russia’s support for Nigeria’s aspiration to assume a permanent seat in the United Nations Security Council, in the envisaged reform of the UN.

Realizing that the relationship between our two countries had suffered the loss of the momentum characteristic of the Soviet era, President Buhari said “to move forward, may I suggest that our countries organize the fifth Joint Commission meeting to review and ratify all the agreements (about 40) contained in the Inter-governmental Nigeria-Russia Joint Commission on Economic, Scientific and Technical Cooperation Protocol of November 11, 2016,” to which his Russian counterpart agreed.

For the African continent that been looked at as a potential bright spot in the world economy for a long time, the flurry of summits between the leaders of the major economies of the world and the Heads of African states and government is a clear indication of Africa coming of age.

For Nigeria and President Buhari in particular, the Russia-Africa Summit had served the desire the two countries to diversify and further strengthen the bonds of our robust bilateral relations. A solid foundation has indeed been laid for the promotion of the mutually beneficial cooperation between both nations.

Garba Shehu, is the Senior Special Assistant to the President on Media & Publicity

How police captured 4 kidnappers in Ogun and rescued victim