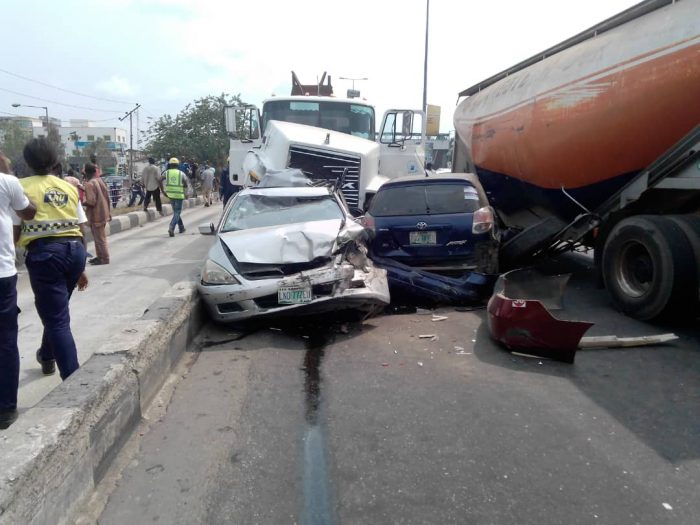 No fewer than nine persons were confirmed dead on Saturday while 12 others sustained various degrees of injuries in separate accidents around Ijebu Ife axis on Sagamu – Ijebu -Ode – Benin expressway.

The FRSC boss noted that seven people were involved in the first crash comprising six male adults and one female adult.

“The crash was suspected to have been caused by armed robbery attacks when the driver of the Toyota picnic suddenly reversed on the highway when he sighted the armed robbers.

” In the process of escaping the oncoming truck, which unsuspectedly rammed into the Toyota Picnic vehicle. The truck in the process fell into the ditch,” he said.

He noted that the two injured victims were rescued and taken to General Hospital, Ijebu-Ode, while the deceased were deposited at the same hospital Morgue.

According to the sector commander, one male adult and six female adults died in the accident.

“The accident was caused by excessive speeding and loss of control, which resulted in a head-on collision.

“The commuter bus due to excessive speed could not maneuver the diversion point and in the process had head-on collision with the coming truck,” he said.

Oladele said that both the injured and the deceased were taken to General Hospital, Ijebu Ode.

Oladele commiserated with the families of the victims and urged them to visit the hospital or the FRSC Command at Ijebu – Ode, for details of the two crashes.

He admonished motorists to drive cautiously within the approved speed limits and resist dangerous overtaking to avoid road traffic crashes.