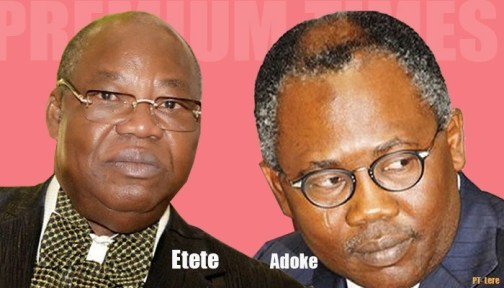 Adoke and Etete: warrants of arrest quashed over OML 245[/caption]

The court ruled that the warrants would be re-issued after the EFCC must have served them by substituted means, the criminal charge levelled against them.

The warrant was issued in April over alleged abuse of office and money laundering by both Adoke and Etete in respect of the granting of the Oil Prospecting License (OPL) 245 to Shell and ENI.

Since all the defendants were out of Nigeria, it has been difficult for the Commission to serve them the charges or produce them in court.

The situation forced the EFCC to apply for a warrant of arrest against them, which was granted by the court, empowering the Nigeria Police Force and Interpol arrest them, anywhere they are seen.

Again, it has been difficult to execute the warrant as the defendants remained in hiding in foreign locations, leaving the court to contend with endless adjournments in the matter.

With the development, the defendants through their counsel went to court, asking that the warrant be set aside, based on the fact that the EFCC has so far not served them any charges.

Justice Senchi obliged them, saying the application was meritorious. The trial judge stated that the EFCC ought to have served the charges to the defendants before applying for the arrest warrant that was granted to it.

The judge further ruled that the arrest warrant would be reissued against the defendants if they refused to show up in court after they have been served and upon a new application by the EFCC.

Justice Senchi, however, stated that the EFCC ought to have informed the court that it could not trace the defendants so as to serve them the charges, and that the court would have authorised the Commission to serve them by substituted means, which may be by a newspaper advertisement or through their legal representatives when they are in court.

Following Justice Senchi’s pronouncements, prosecuting counsel, Aliyu Yusuf informed the court that the Commission was going to apply to serve the defendants, through their legal representatives.

“As we cannot serve them because they are at large, we will write an application for leave of court, permitting us to serve the accused through their lawyers and if after adjournment they did not show up, we will still ask the court for a warrant of arrest,” Yusuf said.

The government of former President Olusegun Obasanjo revoked the OPL 245, which the late General Sani Abacha granted Etete, who was his Petroleum Minister and reassigned it to Shell Nigeria Exploration and Production Company.

Etete’s Malabu Oil and Gas, however, reclaimed the oil block in 2006 through the court.

While Shell challenged the decision, a fraudulent settlement and resolution came under President Goodluck Jonathan’s government with Shell and Eni buying the oil block from Malabu in the sum of $1.1billion.

Investigations by the EFCC into the deal revealed crimes that border on conspiracy, forgery of bank documents, bribery, corruption and money laundering to the tune of over $1.2 billon against Malabu Oil and Gas Ltd, Shell Nigeria Ultra Deep (SNUD), Nigeria Agip Exploration (NAE) and their officials.

This culminated into criminal charges against Adoke, Etete and others, still pending before the FCT High Court and the Federal High Court.

Our plan to tackle challenges of modern migration – NIS