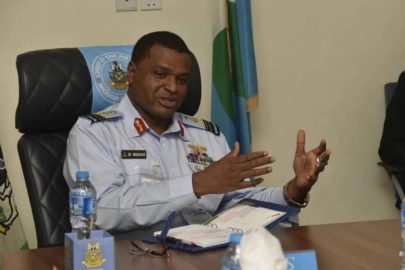 The Chief of the Air Staff (CAS), Air Marshal Sadique Abubakar, has urged personnel of the Nigerian Air Force to be dedicated to their duty of protecting Nigeria’s territorial integrity.

A statement by NAF Director of Public Relations and Information, Air Commodore Ibikunle Daramola in Abuja, said Abubakar made the call on Tuesday at the Tactical Air Command (TAC), Nigeria Air Force, Makurdi.

He commended the officers, airmen and airwomen for their contributions to the successes recorded in the North East, North West and North Central Theatres, among others.

The CAS reiterated that his desire to have a highly-professional fighting force for effective and efficient employment of air power in response to national security.

He expressed satisfaction that in the last four years, the Service had made substantial progress in achieving this.

“To achieve this objective, we had to expanded our organisational structure by creating 2 additional Commands – the Special Operations Command (SOC) with Headquarters in Bauchi, while the erstwhile Training Command was unbundled to create the Air and Ground Training Commands (ATC and GTC),” he said.

He said that the SOC, with its component Quick Response Groups and Wings (QRGs and QRWs), was specifically established to bridge identified gaps in the force protection capability.

On aircraft acquisition, he noted that through the support of the Federal Government, the NAF had inducted 29 brand new aircraft in the last four years with another 20 expected in the next two to three years.

He noted that the Federal Government’s support had also facilitated the reactivation of 20 erstwhile unserviceable aircraft, which were adding value to operations in the various theatres.

The air chief while in Makurdi also inaugurated four Airmen’s Quarters recently renovated to improve the welfare of NAF personnel.

Earlier in his remarks, the Air Officer Commanding Tactical Air Command, AVM Charles Ohwo, pledged the commitment of the Command to mission accomplishment.

He urged beneficiaries of the remodeled blocks to ensure that the facilities were properly maintained.