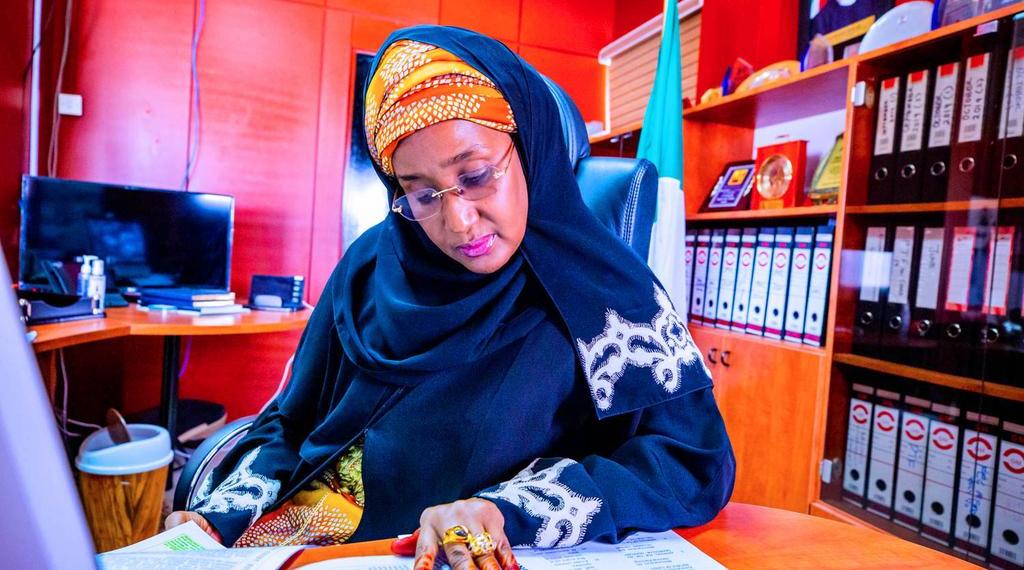 The minister says a total 382,765 pupils, 124,589 households, and 2,859 schools in Ogun State, Lagos State, and Abuja, benefited from the school feeding programme during COVID-19 lockdown.

The Minister of Humanitarian Affairs, Disaster Management and Social Development, Sadiya Farouq, has insisted that her ministry spent over N500 million on feeding schoolchildren in two states and Abuja during last year’s COVID-19 lockdown.

There are, however, modifications to some details – figures and the nature of food distributed – which the minister was quoted to have provided concerning the programme last year.

While responding to public scepticism questioning the transparency of the social intervention programme at a briefing by the Presidential Task Force on COVID-19 last August, Ms Farouq was quoted as saying that N523,273,800 was spent to feed pupils in Ogun and Lagos states as well as the Federal Capital Territory (FCT), Abuja, between May 14, and July 6, 2020.

The official of the legal unit of the ministry, Ahmed Abdullahi, who gave some details about the programme in a counter-affidavit he deposed to on behalf of the minister and the ministry, stated that “he was briefed by the Senior Special Assistant to the President on National Home-grown School Feeding Programme, Titilayo Adeyemi”.

The counter-affidavit, seen by PREMIUM TIMES on Saturday, was filed to oppose a Freedom of Information (FoI) suit seeking an order to compel the minister and her ministry to release the full details of the spending and the beneficiaries.

In what comes as a new twist in the court document, Mr Abdulahi stated that about 5,000 cooks were engaged for the 20-day programme in Abuja and the two states, a claim that appears to negate the impression given by Ms Farouq at her last August’s briefing that it was “uncooked food” that was distributed to the pupils.

Even though schools were shut down during the 20 days period of the distribution of the food, the official stated that 2,859 schools benefitted from the programme in the two states and Abuja.

A civil society group, Kingdom Human Rights Foundation International (KHRFI), had in November last year, sued Ms Farouq and her ministry, along with others, after they ignored its August 6, 2020 letter anchored on FoI Act, 2011, requesting the full details of the spending and the beneficiaries of the school feeding programme.

The organisation stated that it resorted to filing the suit because it “suspected act of corruption in the school feeding spending”.

Ms Farouk and the Federal Ministry of Humanitarian Affairs, Disaster Management and Social Development (FMHDSD), are sued as the 1st and 2nd defendants in the suit.

The rest of the defendants are, the Presidential Taskforce on COVID-19 , the Secretary to the Government of the Federation, Boss Mustapha, and the Independent Corrupt Practices and other related offences Commission (ICPC).

Aside from the minister and her ministry, the other defendants have yet to respond to the suit which is pending before Nkeonye Maha of the Federal High Court in Abuja.

Mr Abdullahi, the FMHDSD’s official, stated in the counter-affidavit on the ministry and her minister that the school feeding exercise during last year’s lockdown gulped N535,873,800.

He added that “cash was not disbursed during the exercise”, but food items valued at N4,200 per household at N70 per child and based on assumption of three children per household.

According to him, a total of 2,859 schools, 382,765 pupils and 12,789 schools benefited from the exercise that lasted between nine to 20 days between May and June last year in Abuja, Lagos State and Ogun State.

“That the programme did not disburse cash, but food items valued at N4,200 per household at the N70 per child for 20 days (a month) assuming there are 3 Children within the targeted age group in each household.”

He added, “That the total number of schools that benefitted under the programme is 2,859.

“That the total number of pupils that benefitted from the programme is 382,765.

“That the total number of households that benefited from the programme is 127,789

On why the minister and the ministry failed to respond to the earlier enquiry by the applicant, Mr Abdullahi stated that they did not willfully withhold information requested.

He acknowledged that the ministry received the applicant’s letter dated August 6, 2020 requesting the information anchored on section 2(1), (2), and (3) of the FoI Act, 2011

Although the law gives a public institution seven days to respond to such request, the official stated the minister “did not deliberately refuse or neglect to reply the said letter”.

He added that the letter had been noted “with a view of replying the said letter” before the applicant proceeded to court.

As to why the addresses and phone numbers of the beneficiaries requested by the applicant could not be released, he stated that the information “is personal information of individuals receiving social, educational, vocational, and financial care directly from the 1st and 2nd respondents on behalf of the Federal Government of Nigeria.”

He added, “That the beneficiaries have at no time given their consent for their identity(ies) to be disclosed.

“That the respondent did not willfully withhold information for any reason.”

Meanwhile, the executive director and lawyer to KHFRI, Okere Nnamdi, said in a statement that the counter-affidavit filed on behalf of the minister and her ministry “is empty and carries no weight” and “lacks credibility, accountability and probity”.

The statement read in part, “We regret to state that the counter affidavit of the Minster and her Ministry is empty and carries no weight, as not even the names of the so called 2,859 schools were disclosed.

“Their counter affidavit is empty, lacks credibility, accountability and probity.

“Their empty counter-affidavit has now confirmed that indeed the school feeding programme during the covid-19 lockdown was one of the greatest scam of the year 2020 and a disservice to the nation.”

Mr Nnamdi observed that they “failed to disclose the names of the schools and the identity of the so-called households” that benefited in Ogun State, Lagos State and Abuja.

“We shall remain committed to our avowed stance to help stamp out corruption through public interest litigation of this nature. We shall pursue this case to a logical conclusion as requested in the freedom of information application,” Mr Nnamdi added.