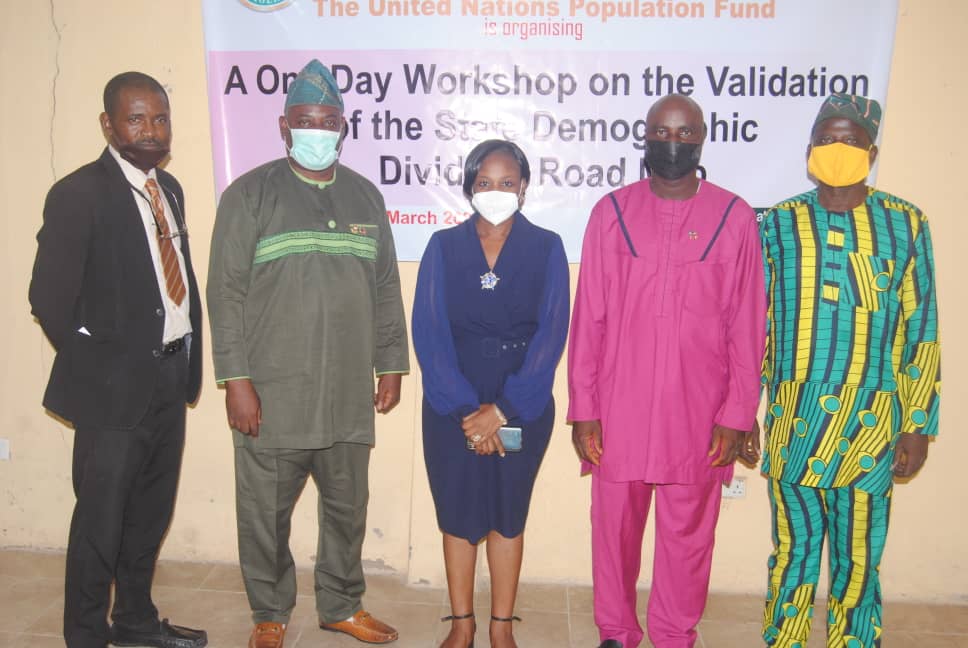 The Ogun State Government is collaborating with United Nations Population Fund (UNFPA), to work out modalities towards reducing dependency rate on the working-age population, who are majorly youths, for improved livelihood of all and sundry.

This indication emerged at a workshop in Abeokuta for stakeholders across relevant Ministries, Departments and Agencies (MDAs), whose roles and responsibilities could help in achieving the State government’s agenda.

Speaking at the event, the Permanent Secretary, Ministry of Budget and Planning, Mrs. Olufumilayo Dada who emphasised the need to encourage larger proportion of the citizenry become more productive and less dependent, said the move was to validate the economic growth potentials, through effective data and statistics that would further promote savings and investment for individuals’ prosperity.

Dada, represented by the Director of Development Partners Coordination, Mrs. Oyinlola Oyenuga also identified other factors to include; strengthening the regulatory framework for the provision of public and private health services, promotion of physical access to health care services for children, youth and adults, provision of robust health care financing, expansion of physical access to education at all levels with specific focus on early childhood education, provision of funds for women and youths for entrepreneurial development and so on.

She affirmed that the State government was fully committed to improving the living standard of the people, irrespective of their social and educational status, through critical analysis of the State population structure, for necessary policy formulation on economy, health, education, among others.

While reviewing the Demographic Dividends report, a Consultant from the Health Policy Training and Research Programme, Prof. Olarenwaju Olaniyan, said the idea would ensure accelerated economic growth for every citizen, by tackling the dependency ratio through adequate government policy, that would give leverage to the common man to be less dependent.

Prof. Olaniyan advised that government should formulate policies that would encourage women of child bearing age to take responsibility for the number of children they could cater for, expressing optimism that implementation of the resolutions at event would enable more people become income earners, as well as boost asset income.