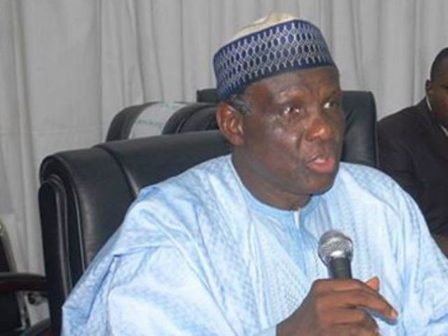 The Nation reports that the party chieftains are moving to the Social Democratic Party (SDP) which is merging with the Peoples Redemption Party (PRP), Peoples Salvation Party (PSP) to form a formidable party ahead of next year’s elections.

The aggrieved party chieftains launched into a marathon meeting/negotiation with the leadership of SDP on Thursday night in Abuja for a merger.

The meeting ended early yesterday with the the signing of a Memorandum of Understanding by the coalescing group at Ladi Kwali Hall in Sheraton Hotel, Abuja.

A highly placed source in the group was quoted as saying: “As a matter of fact, Mantu propped up the name of a party which should be included in the merger but it was rejected. He attended the initial meeting but by the time the MoU was signed, he was not there.

“We are hopeful that he will be at our subsequent meetings. Some of our leaders are suspecting that Mantu may chicken out because he has been begging Adeniran and Gana not to leave PDP.”

Jointly signed by Falae (for SDP) and Prof. Gana (for Movement for a New Political Order), the MoU reads in part: “Whereas on the 12th Day of February 2018, ajoint resolution was adopted at Sheraton Hotel Abuja, for working together to ensure the emergence of a new and credible political order to deepen democracy, good governance and genuine development, with peace, security and social justice. The said meeting also unanimously resolved to build: ‘A restructured, balanced equitable and truly functional Nigerian Federation, ”a umane, free, seIf-reliant and democratic society; ‘a dynamic, productive, transformed and sustainable economy; ‘a just, fair, egalitarian and peaceful nation, ‘a land of bright and full of opportunities for all Nigerians; and, a national culture of raising good leaders through effective mentoring;

“Whereas, it was also agreed that the proposed movement shall be directed, driven and defined by such core values as: Justice, fairness, equity and progress; Democracy, good leadership, good governance and sustainable development; Transparency, integrity, truth and honour;

“Accountability and zero tolerance for corruption; Respect for human dignity, human rights and sanctity of human life;; and Peace, security, harmony, cooperative solidarity, within the rule of law; and International cooperation for a common humanity within a secure and peaceful order.

“Whereas, the movement further resolved to be inspired and motivated by the ideals of social democracy, with great emphasis on: the triumph of social justice; the nobility of human dignity; the harmony of fairness and equality; the power of working together in solidarity; the excellence of good governance, driven by good leadership; the wisdom of reforms and transformation far beyond mere growth; the horror of poverty, demanding eradication; the dignity of prosperity; the imperative of democracy and the security of peace with justice

“Whereas with due reference to these objectives, core values, and ideals, a Strategy Committee was mandated to search for a suitable, popular, meaningful and widespread platform, with a name that already resonates with the people and to make appropriate recommendations; and

“Whereas, the Strategic Committee, comprising representatives from all the six geopolitical zones of the Federation, have met and submitted their report, unanimously recommending the adoption of Social Democratic Party(SDP) vehicle by the movement for a new political order:

“Therefore, we hereby resolutely agree to: (a) Fuse together into one political form; (b) adopt the Social Democratic Party(SDP) as the political vehicle for the fused political formation; (c) Convene a non-elective convention for Saturday, 14th April, 2018; (d) authorize the National Working Committee to serve as the Interim Management Committee until the said convention; Set up a National Steering Committee of 12 members to guide the Interim Management Committee during the transition period; Raise a Constitution Review Committee to consider all necessary amendments to the party constitution.”

Reacting to the development, elder statesman, Dr. Junaid Mohammed said: “Those involved in SDP are the Peoples Redemption Party(PRP), Peoples Salvation Party(PSP), the Social Democratic Party(SDP) and some elements of Peoples Democratic Party(PDP). It was like a merger but we do not want to call it so because the All Progressives Congress(APC) has destroyed the concept of merger.

Asked if some governors and National Assembly members have subscribed to SDP, Mohammed added: “It is not compulsory to have governors or members of the National Assembly in a party to succeed. There are about 65 to 67 parties thereabout in the country. In terms of electoral performance, most of the parties are not on ground. The two parties which have led the country are not doing well. They have impacted negatively on the economy and our political life. A three-party or a four or five -party system will be better.”

How Baby factory was uncovered in Lagos, Togolese arrested, Three children were rescued