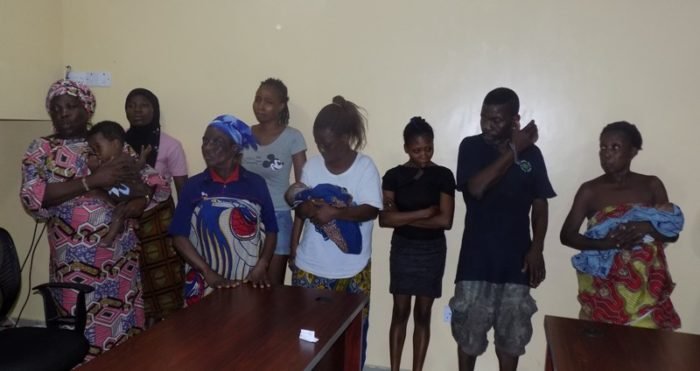 The Lagos State Government has uncovered an alleged illegal baby factory in Lekki area of the state and arrested a Togolese woman who allegedly runs the home and rescued three children.

Also arrested was a pregnant woman and seven others who were brought to the Ministry of Youth and Social Development on Friday evening.

Officials of the ministry, escorted by 20 policemen from the Ajah Police Station and Area ‘J’ police Command stormed the area at Baboon Village, Ajele area of Ajah and arrested the suspects.

Commissioner for Youth and Social Development, Agboola Dabiri said it received a report of a woman who allegedly habour pregnant ladies, kept them until they delivered and sold the babies under the guise of being a traditional birth attendant.

“Surveillance was carried out at the location, a shanty area off Mobil Road, Ajah area of Lekki. The assistance of the Area ‘J’ Police Command and the Ajah Police Station was sought and they deployed 20 police officers to assist with the mission.

“Adults (including the suspected perpetrator) were apprehended along with three babies, two of who were extremely sick,” he said.

Dabiri said the government had recently issued two weeks ultimatum to people running illegal homes to close them or have them registered or face the wrath of the law, adding that the raid on the illegal home was after the expiration of the ultimatum.

The prime suspect, Mrs Regina Bankole, who said she hailed from Togo but married to a Nigeria, denied that she run a baby factory, but admitted that she is a traditional birth attendant which she had been doing for the about 30 years.

She said she did not sell babies and that she was well known in the area as a traditional birth attendant who conducted delivery for pregnant women in the traditional way.

She said one of the three babies recovered from her place was her child and that the other two belonged to someone else kept in her custody.