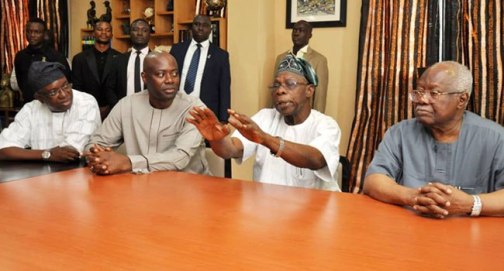 Nigeria’s former President, Olusegun Obasanjo has warned the Oyo governor-elect, Seyi Makinde not to steal and to shun all forms of corruption.

The former president, who received Makinde in Abeokuta, Ogun State on Thursday said “don’t fight, don’t steal, settle your rift amicably. The governor and his deputy cannot do it alone and you must know this because they did not win the election alone. Let your government be that of unity and about true development.

Obasanjo called on the people of Oyo State to cooperate with Mr Seyi Makinde, the governor elect of the state.

According to Obasanjo, the love and votes of the people of Oyo State have ensured the emergence of Makinde, adding that their continued support was necessary to make him succeed as a governor.

He urged Makinde to jettison the type of democracy that only targeted or benefited selfish interests of selected few.

“You have a onerous task ahead in improving the status of the capital of the old Western Region and you have to work to unite them all.

“You need to shun corruption, be transparent and embark on developmental projects which would be a delight to the people of Oyo State.

“You need to give them something new, positive and the type of governance which delivers dividend of democracy at their doorsteps,” Obasanjo said.

I WILL RECLAIM MY MANDATE FROM APC – DR BELLO MOHAMMED MATAWALLE